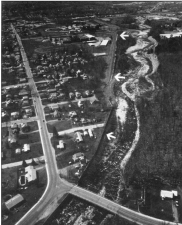 The Bennington Local Protection Project was undertaken by the Works Progress Administration (WPA), in Bennington, Vermont during the Great Depression. Later reconstruction projects were handled by the United States Army Corps of Engineers.

“The Bennington Local Protection Project is located along the left bank of Roaring Branch, a tributary of the Walloomsac River, in Bennington. The project protects Bennington from damage caused by the floodwaters of Roaring Branch. The project, about one mile in length, begins about 1,000 feet upstream of the Brooklyn Bridge and ends on Park Street. It consists of: Three sections of concrete floodwall with stone slope protection that total 1,472 feet. These include two sections of newly constructed concrete floodwall totaling 147 feet, and a 1,325-foot-long floodwall that was originally built by the town as a Works Progress Administration (WPA) project in 1939. The first section of floodwall, newly constructed, starts about 500 feet upstream of the Brooklyn Bridge and extends for 34 feet before tying into the second section of floodwall, which is the WPA floodwall. The third section of floodwall is located immediately downstream of the WPA floodwall and is 116 feet long.

During the floods of December 1948 and August 1950, a 725-foot-long section of the WPA-built floodwall was seriously damaged. The Corps reconstructed this section of floodwall as a small project under Section 208 of the Continuing Authorities Program. Construction was initiated in July 1951 and was completed in April 1952 at a cost of $196,000. This 725-foot-long section of the WPA-built flodwall was later incorporated as part of the Bennington Local Protection Project.”