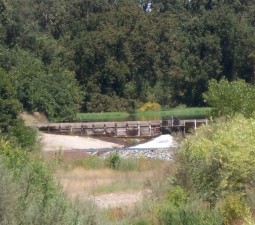 In 1929 the Linden Irrigation District was incorporated and established plans to divert  water from the Calaveras River at Bellota, a community about five miles east of Linden,  and create a series of percolation dams to restore the depleted ground water table in the area.  There had been an early dam in the same vicinity, built in 1905, but it washed out within a year.

A Civil Works Administration (CWA) project was authorized late in 1933 to construct the Bellota Dam and clean out the channel of the Calaveras River.  Local opposition to the plan resulted in an injunction against the project, which was overridden by Harry Hopkins, director of the Federal Emergency Relief Administration (FERA), and the dam was built. But the CWA ended in only six months without completing the full project, which was completed by the Irrigation District later in 1934 with the Pezzi and Webster dams.

For many years, Bellota Reservoir was also used by San Joaquin County residents for fishing and recreation  (Interview with Sally Spenker, resident of Lodi, California).

In 1948, the Stockton East San Joaquin Conservation District was organized. It built a new concrete diversion dam that year to force water into the old Calaveras River channel (the Calaveras River splits near Bellota and most of the runoff goes down Mormon Slough toward the Delta).  This time, the idea was to aid in replenishment of ground water for Stockton (Smith 1976).

Today the Bellota Dam is under the authority of the Stockton East Water District.  It is surrounded by chain-link fencing and is inaccessible to the general public. It is used to pool water that is then pumped to the District’s drinking water treatment plant for the city of Stockton. The dam also operates as a weir and is used to facilitate the movement of fish from the Calaveras River with the use of two fish ladders (Lutz 2005).

Eventually the district plans to replace the dam, when funds are available.

Project originally submitted by Gail Erwin, with the San Joaquin Historical Society and Museum on August 25, 2009.