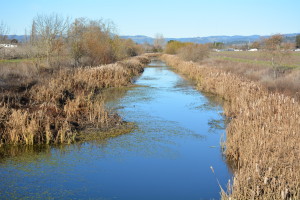 The first WPA project in Sonoma County, California made improvements to a large reclamation project which is mostly forgotten today.

Historically, drainage of swampland and naturally poorly drained areas of the United States opened up millions of acres to farming, especially in the Corn Belt of the Midwest, where vast tracts of “wet” prairie were drained for settlement.

Government surveys indicated that nearly a fourth of the nation’s potential agricultural land, approximately 216 million acres, was too poorly drained for productive farming.

At first, privately financed companies organized to reclaim these swamplands. Created in 1784, the Dismal Swamp Canal Company had the dual goal of draining part of the Dismal Swamp in Virginia and North Carolina for farming, as well as building a canal which was completed in 1794 by slave labor.

Concurrently, the State of Maryland enacted the first state law in 1790 creating publicly financed drainage districts, with Delaware following in 1816.

California passed its first drainage act in the late 1880s, permitting communities to organize drainage districts to make improvements through the issuance of bonds. The Bellevue-Wilfred Drainage District was the first to organize in California under Act 1825, and the only district created in the greater San Francisco Bay Area.

Located south of Santa Rosa, the Bellevue-Wilfred Drainage District represented a swath of low-lying, poorly drained farmland stretching between the rural communities of Bellevue and Wilfred. Early improvements to the district included digging open ditches and building a network of berm roads above wet areas.

On Tuesday, October 15, 1935, 40 men taken from the county’s relief roll began work on the Bellevue-Wilfred Drainage District. The WPA approved $5,532 for the project, with the sponsors giving an additional $215 for materials and supervision. Ironically, rain and wet conditions delayed the start of the project by a few days. Work consisted of digging ditches and channels throughout the district. The project eventually increased to 60 men, working approximately two months to complete the project.

The Bellevue-Wilfred Drainage District dissolved after the 1950s, as the area began to suburbanize. Yet improvements made by the district and the WPA are still visible in rural tracts of what is now southwest Santa Rosa.

The most noticeable structure, the Bellevue-Wilfred Channel, wends its way through the area, emptying into Laguna de Santa Rosa. Maintained by the Sonoma County Water Agency, the channel and its system of ditches serve as flood control and create wildlife habitat.

Prior to the New Deal, the federal government’s role in rural drainage had been mostly in an advisory capacity. With the creation of work-relief programs, the federal government played a more direct role, aiding the drainage of thousands of acres of wet and flood-prone land, perpetuating one of the most significant transformations of the nation’s natural landscape.