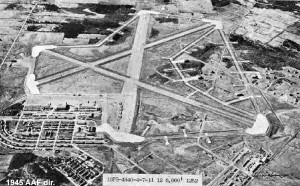 Dow Army Airfield, July 1944. Around 1950, the facilities on the south side of the airfield were razed and a new Air Force Base built on the north side of the main runway.

Created in 1927 as a commercial airport named Godfrey Field. In 1940 the Maine State Defense Commission considered 6 airports priority for use as military bases, Bangor being a key one. A 1940 Maine State Legislature report records that construction of the base was done by the W.P.A. and improved by FERA with  a 1400 x 100 gravel runway and a 1500 x 100 Gravel runway.

“[T]he airfield was taken over by the U.S. Army just before World War II and renamed Godfrey Army Airfield and later Dow Army Airfield. It became Dow Air Force Base in 1947, when the new U.S. Air Force took over many Army air assets… With the inactivation of Dow AFB in 1968, most of the base was purchased by the city of Bangor and reopened the following year as Bangor International Airport. That portion of Dow AFB not turned over to the city became the basis for the current Air National Guard Base and the Maine Army National Guard’s Army Aviation Support Facility…

The base is the home of the 101st Air Refueling Wing (101 ARW), Maine Air National Guard. Part of the Northeast Tanker Task Force, the 101 ARW provides 24-hour air and ground refueling for DoD and allied aircraft bound across the Atlantic. It also deploys around the world under the control of the Air Force’s Air Mobility Command (AMC) for operations such as Noble Eagle, Enduring Freedom, and Iraqi Freedom. The wing also provides logistics support to the State of Maine during natural disasters or as otherwise directed by the governor.”  (Wikipedia) 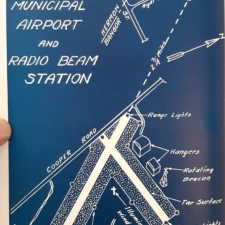 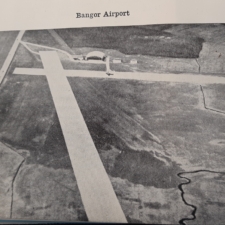