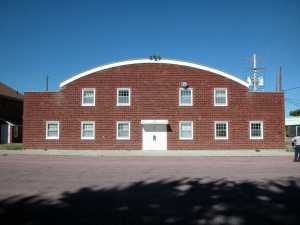 In 1935, Spencer applied for a Works Progress Administration (WPA) grant for the construction of an auditorium. When the town had not heard anything by November, a delegation of representatives of the town drove to Lincoln to speak with Mr. Felton, the state director of the WPA. He assured them that, while the federal government had not yet approved the project, the auditorium project seemed a worthy one, and was likely to be approved in due course. At the end of January 1936, Spencer had its answer: the project had been approved. However, they did not receive a full allocation for the construction of the building. They were granted $2000.00, which would be enough to merely begin the project. The community voted to proceed on faith that further funds would be given when they were available.

Within two weeks, work was underway tearing down the old Z.C.B.J. Hall, parts of which would be reserved for use in the new building. The auditorium itself would be constructed on the site of the old Krotter-Schultze Motor Company, which had burned down several years before. By April, the basement had been excavated and the foundation poured. Eight laborers were working on framing the building, which was to be 70 by 130 feet. It was to have a 50 by 100 foot dance floor, a balcony with a kitchen and meeting rooms, a stage for bands, and a heating plant in the basement.

The auditorium project was plagued by delays not of their making. Because of the meager initial appropriation, Spencer had to go back for additional monies from the federal government. This caused delays in the construction that lasted weeks. Later, the workers ran out of materials, and the WPA was likewise almost out of money. In an effort to keep all of the projects running, the WPA was ordering as few supplies and materials as possible, doling them out as they received them. This also caused the project a significant delay.

By April 1937, the auditorium was completed and plans for the dedication were underway. Plans called for addresses by WPA officials, judges, and Governor R.L. Cochran, although he was unable to attend at the last minute. In addition, there were songs by the high school glee club, all leading to the grand opening dance, where the music was provided by Lawrence Welk and his Orchestra. While the attendance for the afternoon portion of the festivities was considered “good”, the numbers that crowded the auditorium for the dance could only be described as astounding. The Advocate estimated that 2500 were in attendance at the dance at 11 o’clock, and although the festivities were to end at 1:30 a.m., many of the merry-makers refused to leave until after 3 a.m.