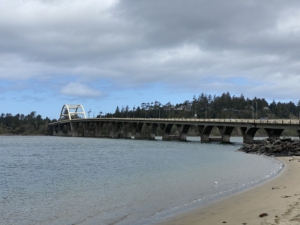 The bridge over Alsea Bay (mouth of the Alsea River) in Oregon was constructed with funding from the Public Works Administration (PWA) in 1934-36.  It was one of five PWA-funded bridges over Alsea Bay, Coos Bay, Siuslaw River, Umpqua River, and  Yaquina River that completed the Oregon Coast Highway. All but the Alsea River bridge still stand.

The coast highway was developed after 1914 by the state and county highway departments, but money ran out in the Great Depression before the job could be finished.  With the advent of the New Deal, the PWA offered $1.4 million and a loan of $4.2 million – soon replaced by a state bond issue. The year after completion of the five bridges, coastal tourism in Oregon jumped by over two-thirds.

The original Alsea Bay bridge was over 3,000 feet long.  The concrete Art Deco obelisks flanking both approaches, with pedestrian plazas and spiral stairways at the south end, remain (there are similar elements on the other PWA coast bridges).

The HAER report on the Umpqua Rive bridge summarizes the importance of the five PWA bridges:

“The Umpqua River Bridge is historically significant as one of the five Depression-era PWA bridges that connected the Oregon Coast Highway. The completion of these bridges is considered the dividing line between the period of relative isolation and dependence on sea transportation of Oregon’s southern coastal region to its modern era of land transportation and connection with the hinterland.”

The Alsea bridge has since been demolished and replaced. At the time of its replacement in 1991, the Oregon Department of Transportation (ODOT) built an interpretative center for the old bridge.  It currently serves as the Historic Alsea Bridge Interpretive Center and the Waldport Heritage Center.

Alas, there is not HAER report on the Alsea Bridge, as there is for the other four PWA coast bridges, and no historic photographs in the Library of Congress.

Watch In Landscape Harmony: New Deal Bridges for the Oregon Coast about the construction of all five coastal Oregon bridges built to complete the Coast Highway (Highway 101), funded by the PWA. (8:15) 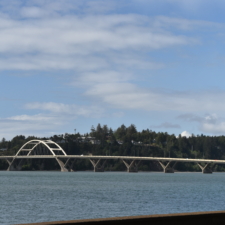 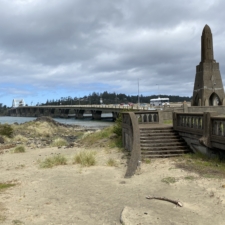 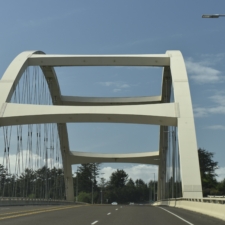 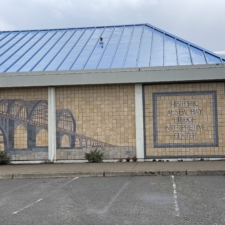 One comment on “Alsea Bay Bridge (replaced) – Waldport OR”