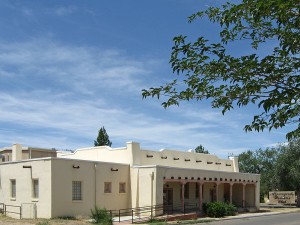 Alamogordo Woman's Club building, built in 1937 as a Works Progress Administration project, located at the southeast corner of Twelfth Street and Indiana Avenue in Alamogordo, New Mexico. It is on the National Register of Historic Places (item number 03000734) and the New Mexico State Register of Cultural Properties (site number 1831).

“While a variety of public works programs emerged under the umbrella of the New Deal, the WPA with its specific goal of providing work relief for the locally unemployed exerted the greatest impact on small communities in New Mexico (Kammer 1994:48-67). Not only did it create local jobs, it resulted in much-needed public works that contributed to the quality of life in these communities. Administered at the state level and dependent upon local sponsoring authorities who often supplied the land and building materials as their share of the project’s cost while the federal government supplied the funds to pay workers, the WPA projects carried out throughout New Mexico greatly transformed the built public environment. Schools, municipal buildings, parks, courthouses, airports, and hospitals appeared throughout the state as the result of WPA funding. So, too, did, several public buildings connected with the efforts of the NMFWC [New Mexico Federation of Women’s Clubs]. In Alamogordo, Carrizozo, and Fort Sumner, clubhouses funded as WPA projects and designed to serve the communities at large appeared.”