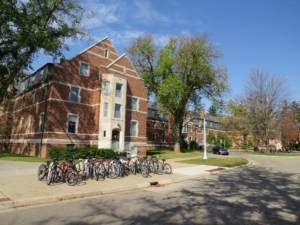 “The I-shaped plan of Abbot Hall was designed as part of a four-dorm complex for male students, including its partner Mason Hall as well as Synder-Phillips residences. Shared common areas including the kitchen and bakery were originally built to link Abbot to Mason Hall. However, in 1958 renovations to basement corridors were completed to allow residents to walk from one hall to the next. Created as the residential complement to the female dormitories in the West Circle Complex, Abbot Hall is similarly Collegiate Gothic in style. The building, named after Theophilus C. Abbot, the third president of the University, features an arched entrance bearing an inscription in old English lettering, semi-hexagonal limestone multistory bay windows, and limestone trim.”