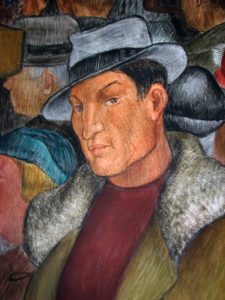 Victor Arnautoff, Self Portrait, 1934
The artist included this self portrait in his “City Life” mural.
Photo Credit: Robert Cherny

Victor Arnautoff was a prolific artist of public murals during the New Deal, many of which are still in place.

Born in Russia in 1896, Arnautoff was a cavalry officer in WWI and later in the White Siberian army during the Russian Civil War. Escaping into northeastern China, he married and his father-in-law paid for him to attend the California School of Fine Arts in San Francisco. His first public mural, in 1929, can be seen in the city’s Old Cathedral of the Holy Virgin.

Arnautoff and his family moved to Mexico where he worked as an assistant to the famed muralist Diego Rivera. Returning to San Francisco in 1931, Arnautoff gained attention by painting a large fresco mural on his studio wall. He then did several fresco panels at the Palo Alto Clinic that remain on view. 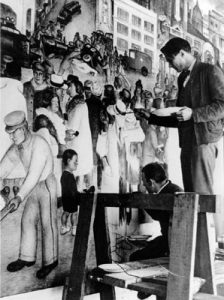 With the New Deal in 1933, federal funds became available for public art. In San Francisco, the Public Works of Art Project hired 25 artists to create murals at Coit Tower. Arnautoff, highly experienced in fresco technique, was designated technical coordinator of the project. His mural, City Life, completed in 1934, presents a vivid kaleidoscope of downtown San Francisco at a time of economic and social upheaval.

Arnautoff’s next New Deal commission, a large mural in the Protestant chapel at the Presidio of San Francisco, funded by the State Emergency Relief Administration, depicts historical vignettes and contemporary activities at the military base, including the Army’s supervision of the Civilian Conservation Corps. 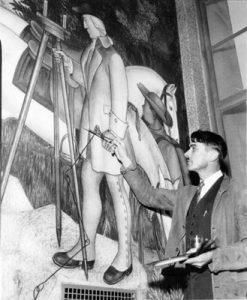 Arnautoff’s political views moved to the left in the mid-1930s, and he sometimes incorporated social criticism into his art. His largest single New Deal commission was thirteen fresco panels on the life of George Washington, painted in 1936 at the newly built George Washington High School in San Francisco. Funded by the WPA’s Federal Art Project, the murals present a counter narrative to the high school history texts of the time: the panel on Mount Vernon emphasizes Washington’s dependence on slave labor, and that on the westward “march of the white race” (Arnautoff’s description) shows it taking place over the body of dead Indian.

He exhibited at the 1939 Golden Gate International Exposition, the 1935 California Pacific Exposition, and the 1940 New York World’s Fair. 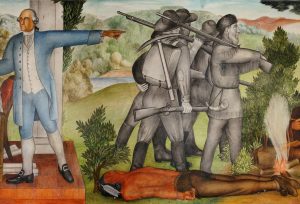 Between 1938 and 1942 Arnautoff completed five Treasury Section post office murals. Those in College Station and Linden, Texas, prominently featured African Americans, rarely depicted in public artworks. His post office murals can still be seen at Linden and at Pacific Grove and South San Francisco, California. Arnautoff’s mural for the Richmond, California, Post Office was recently discovered in a packing crate in the post office’s basement. It is being restored for exhibition in the Richmond Museum of History. 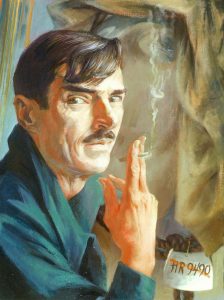 In the 1950s, Arnautoff, while teaching at Stanford, was shunned for his leftist views and was interrogated by the House Un-American Activities Committee. In 1963, after the death of his wife, he emigrated to the Soviet Union where he continued to paint and make prints and created three large public murals using mosaic tiles. He died in 1979.

Robert W. Cherny is professor emeritus of history at San Francisco State University. He is the author of Victor Arnautoff and the Politics of Art (University of Illinois Press, 2017), and numerous books and essays on U.S. history and politics.
Email | View all posts by Robert Cherny →