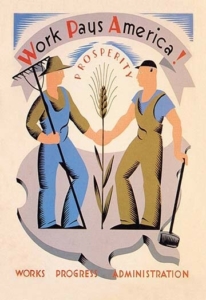 The New Deal was an unprecedented campaign of national construction. According to a study by economists Price Fishback and Valentina Kachanovskaya, the New Deal cost $41.7 billion at the time—about $827 billion in today’s dollars. What did America get for its money? Michael Hilzik, in his book The New Deal, A Modern History, summed it up this way: “The WPA produced 1,000 miles of new and rebuilt airport runways, 651,000 miles of highway, 124,000 bridges, 8,000 parks and 18,000 playgrounds and athletic fields; some 84,000 miles of drainage pipes, 69,000 highway light standards and 125,000 public buildings were built, rebuilt or expanded. To this day, Americans still rely on its work for transportation, electricity, flood control, housing and community amenities.” The New Deal laid the foundation for the decades of productivity and prosperity that followed. Eighty years on, America’s infrastructure has fallen into desperate disrepair. President Biden’s $1 trillion plan to “build back better” is a belated downpayment on decades of deferred maintenance, as well as investment in America’s future.