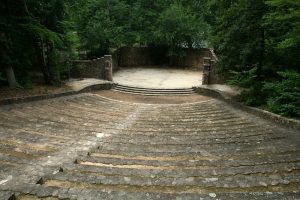 The New Deal, more than any other federal infrastructure or works project in the history of the United States, provided national support for the development of new work in the arts. The New Deal was also unique to the extent that it focused on localized projects, showcasing the particularities of funded sites, and produced new connections between various local sites within a broader, national network.

Ashley Mattheis and Ryan Brownlow, two scholars at the University of North Carolina, have produced “The Forest Theatre, Expressive Landscape, and the New Deal at UNC Chapel Hill: A Bibliographic Essay,” exploring the development of the Forest Theatre as part of a New Deal project in North Carolina, and tracing its connection to the New Deal’s Federal Theatre Project (FTP). Mattheis and Brownlow have compiled archival materials (including photographs from local collections, an annotated bibliography, and two topic biographies) to suggest potential avenues for further research into the New Deal, emphasizing the politics of place and site, the arts, and the social and cultural contexts of the New Deal era.

This invaluable resource helps to tell a story of culture- and place-making and the role of government in promoting the intersection of vernacular and national cultures–one that politicians and everyday people alike might heed. You can read the full text here.