Nearly 80 years after it opened, San Francisco’s Coit Memorial Tower stands not only as a celebrated architectural landmark but also as a historical record of the city’s tumultuous past.

The murals that embellish the tower’s interior are the legacy the Public Works of Art Project (PWAP) a New Deal program that provided jobs for artists during the Great Depression. The agency hired 27 diverse artists and their assistants to decorate the walls of the new Coit Tower on San Francisco’s Telegraph Hill. The resulting frescos document the city and its surrounds. They also capture the social, economic and political ferment of the time.

Many of the Coit Tower artists were inspired by the Mexican muralist Diego Rivera, including Berhard Zakheim, who had studied with Rivera in Mexico. Zakheim’s daughters Masha Zakheim and Ruth Gottstein produced “Coit Tower, Its History and Art,” published by Volcano Press. In the book’s forward, Ruth Gottstein, now 90, recalls when Rivera and his wife Frida Kahlo were guests in the Zakheim home in San Francisco.

Labor strife had been smoldering in San Francisco during the summer of 1934 while the muralists worked. Two strikers had been killed at the waterfront on what became known as Bloody Thursday. A general strike shut down the city as unions marched up Market Street to honor the fallen. 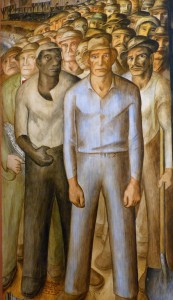 Scenes of social and political discontent radiate from a number of the Coit murals. Some critics, including public officials, fumed that public money had been spent to “breed dissention.” In the years after the frescos were unveiled, they were vandalized and neglected. By the 1970s they had been further damaged by water damage and cigarette smoke. The public was permitted to view them only from outside through the tower’s locked glass doors.

“Coit Tower, Its History and Art” offers a close up view. Color photographs and descriptions of the murals accompany stories about the artists who rendered them.  The book provides the historical and political context in which the murals came to be and deserves much credit for the recent surge of citizen activism that is helping to preserve them.