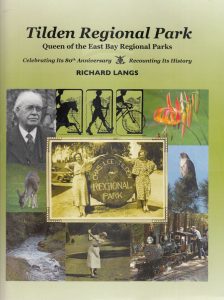 2016 marked the hundredth anniversary of the National Park Service and the 75th of the East Bay Regional Park District (EBRPD), a magnificent two-county system now comprising 65 parks and 120,000 acres of remarkably varied land. Both occasions were celebrated with several public events in Tilden Regional Park in the hills above Berkeley, including the debut of Richard Langs’ comprehensive history of the heavily used 2,000-acre park only minutes from the University of California campus.

The connection between the two park systems—as well as the state parks—is not coincidental since it was faculty and graduates of the University who created and largely built the NPS and then, 25 years later, in the depths of the Great Depression, did the same for the nation’s first regional park system. Langs makes clear that Tilden Regional Park is yet another overlooked New Deal legacy.

CCC “boys” made the ten enormous relief models of the East Bay used to persuade voters to pass a bond measure needed to purchase surplus watershed lands that would otherwise have been developed, as was land in the Oakland hills and beyond once New Deal tunnels and roads made them accessible. CCC and WPA workers constructed roads, buildings, picnic areas, and water systems, removed poison oak, and planted thousands of trees now in their maturity.

Langs—an ardent golfer—gives special attention to the building and history of the Tilden public golf course which democratized a sport previously available only to a few. He also chronicles the park’s two steam trains, historic merry-go-round, lakes, Little Farm, and other attractions.

Historic photos culled from the EBRPD archives demonstrate the enormous investment in thought and labor that went into the creation of Tilden. Yet, few visitors regard it as a cultural rather than natural landscape designed for the benefit of millions and generations to come. Fewer still who use Tilden (myself included) know the personal stories of the visionary leaders and staff who made it and its sister parks possible. With the aid of Langs’ research and writing, they can now enjoy the Park in time as well as in space. Available at Tilden Nature Center or by emailing [email protected]