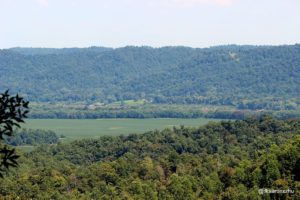 Shawnee State Forest, a 63,118-acre preserve bordered by the Ohio River in Southern Ohio, began with a 5,000-acre purchase in 1922. By far the largest of Ohio’s forests (making up nearly one-third of the entire Ohio State Forest system), the Shawnee was largely inaccessible to the public until, in 1933, it became the first Civilian Conservation Corps (CCC) site in Ohio.

More than 1,500 CCC men worked at Shawnee. Of the seven CCC camps, four were segregated. Some 220 African American enrollees from Company 1545 were stationed at Camp Roosevelt, a camp made up entirely of World War I veterans. Having fought abroad and explored the world beyond segregation, many of these men struggled to readjust to life in the U.S. In the CCC they were guaranteed work and lodging. They were paid the same wage as white CCC members–one dollar per day. 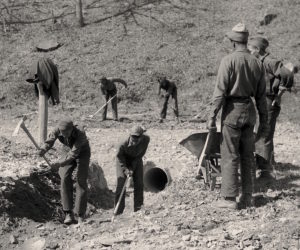 The men of Company 1545 created Roosevelt Lake and built the Mackletree Road Bridge. Arguably the most significant CCC structure in the forest, the bridge was built of local honey-colored sandstone and American Chestnut timbers the men culled from the surrounding forest to flight blight.

In 2017 when heavy logging equipment could no longer safely pass over the small, rustic bridge, it was replaced by one of concrete. A silver lining was the creation of a memorial to Company 1545, built from the former bridge’s weathered sandstone. 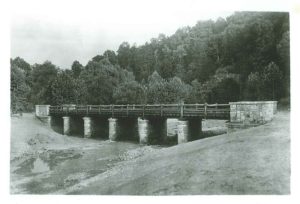 While much of the CCC’s physical work remains intact, significant features, like the bridge, have already been lost or closed to the public and additional threats loom. Today, some of the scenic roads the CCC had designed to promote slow motoring and give visitors access to lookouts and picnic spots have been closed to the public and are restricted to logging use. Another threat was delayed last summer when local activists rose up to contest the proposed removal of the CCC’s Churn Creek Lake. Though the project to breach the spillway was delayed, elimination of the lake is likely.

New threats to the land and the CCC-crafted landscape seem to appear daily, including a proposal to open 50-mile trails through the forest for off-road vehicles. This plan is open to public comment, but seems likely to be implemented, despite impacts to the CCC-built landscape and State’s conservation mission. 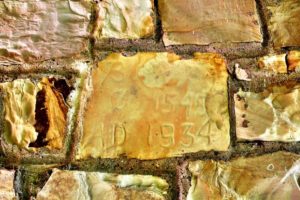 Signature in stone
When the men of Company 1545 completed the Mackletree Road Bridge, they inscribed it with their “signature.”
Photo Credit: Image courtesy of Andrew Lee Feight, Ph.D., from the Scioto Historical Series, private collection, Friendship, Ohio

This is not the future the CCC saw for Shawnee. “But it is never too late for the Ohio Division of Forestry to hear from folks who support preserving and protecting New Deal-era historic sites and structures,” says “Dr. Andrew Feight, a history professor at Shawnee State University. “With the interests of the logging industry primarily shaping forest management policy, state officials would benefit from hearing from the supporters of historical preservation and the being reminded of the original multiple-use and conservation vision of the CCC.”

The story of Company 1545 and the work of the entire CCC in Shawnee State Forest has been well documented by Dr. Andrew Feight on his excellent website www.sciotohistorical.org. 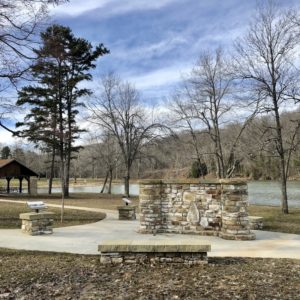