The New Deal was an amalgam of dozens of programs and agencies created by the Roosevelt Administration and the Congress.

Some came into being by law, some by executive order; some are well known, some are not; some changed names or were amended in mid-course; some lasted only a few years, some still exist.  It can be confusing, and we hope that this list can help sort things out.  The list of programs  is as complete as you will find anywhere.

For each New Deal program, there is a summary of the law, agency, goals and achievements, as well as key actors and legacies.  These are based heavily on primary sources (which are cited) and are as accurate as possible.

—Click on a program name and a pop-up text will appear.
—Click here for all New Deal programs listed alphabetically
—For a chronology of programs, see the New Deal Timeline page.

Emergency Banking Relief Act (1933)
Gave the president emergency powers over the US banking system, under which he called a ‘bank holiday’ to allow evaluation of all banks and closure of insolvent ones.

Social Security Act (1935)
Created a national system of pensions, unemployment insurance and aid to mothers with children, and created Social Security Administration (SSA) to administer it.

National Youth Administration (NYA) (1935)
Created by Executive Order as a subdivision of the WPA.
Hired young men and women, both in and out of school, for works programs.

Army Corps of Engineers (1802)
Built levees, dams and canals across the country, built the Missouri river basin project and made levee improvements along the Mississippi, Ohio and Sacramento Rivers.

Quartermaster Corps (1775)
Responsible for the movement of supplies, food, and services to support American troops. During the New Deal, the Quartermaster Corps received substantial funding from both the Public Works Administration (PWA) and emergency relief appropriation acts.

Public Works of Art Project (PWAP) (1933)
Paid for by the CWA and operated by the U.S. Treasury.

Indian Arts and Crafts Board (1935)
Created to promote and protect Indian arts and crafts.

Federal Project Number One (Federal One) (1935)
Created by the WPA to employ artists, writers, historians and other professionals
The largest of the arts programs, with five divisions:

A reorganization in 1939 changed the names of the first three to WPA Arts Program, WPA Music Program and WPA Writers’ Program, eliminated the Theater project, and made the HRS part of the WPA’s Research and Records Program.

Historic Sites Act (1935)
Made the conservation of historic sites a responsibility of the National Park Service and gave it power to survey, select and preserve buildings and sites of national significance.

Public Buildings Administration (PBA) (1939)
Created under the Reorganization Act of 1939 to manage all federal (non-military) buildings, taking over the work of the U.S. Treasury Procurement Division.

Federal Works Agency (FWA) (1939)
Created under the Reorganization Act of 1939 as an umbrella agency to
administer existing public works programs, including the PWA, WPA, USHA, PRA (BPR), and PBA.

Federal Security Agency (FSA) (1939)
Created under the Reorganization Act of 1939 to manage a number of federal agencies & offices, including the the CCC, the NYA, and the Social Security Board.

Shelterbelt Project (1934)
A large tree-planting project in the Great Plains, to protect against wind erosion and to provide work for the unemployed.

Resettlement Administration (RA) (1935)
Evolved from earlier emergency relief legislation.
Created planned communities for Americans whose livelihoods had been upturned by the Depression; rehabilitated overused land; made loans to farmers.

Federal Parks Reorganization (1933)
Transferred all national monuments and battlefields under the National Park Service by Executive Order, as well as federal buildings in Washington D.C.

Shelterbelt Project (1934)
A large tree-planting project in the Great Plains, to protect against wind erosion and to provide work for the unemployed.

Taylor Grazing Act (1935)
Ended free grazing on federal lands and created regulated grazing districts across the country, administered by a new Grazing Service in the Department of the Interior.

Repeal of Prohibition (1933)
21st amendment to the Constitution approved by Congress, followed by states.

Export-Import Bank (1934)
Created to help facilitate trade with other nations; Began as two banks, consolidated into one in 1936.

Indians in Oklahoma and Native Alaskans (1936)
Extended provisions of the Indian Reorganization Act to these areas.

These summaries are the work of Brent McKee, with assistance from Richard A Walker.

If you spot an error or omission, please write us at i[email protected]

That over 85,000 Indians/Native Americans worked on the CCC's conservation projects? 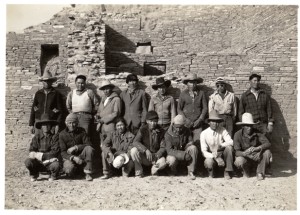