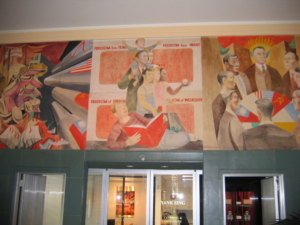 A San Francisco Chronicle piece by Gary Kamiya, compares the efforts to remove the Arnautoff Murals at the George Washnighton High School in San Francisco to similar attacks on the Refregier murals during the McCarthy era. Titled, “When a red-hunting Congress took on SF murals — and lost,” the piece brings into focus the forgotten history of art censorship in San Francisco. Read the story here.

Living New Deal founder Gray Brechin has written extensively about the attempts to censor Anton Refregier’s murals at the Rincon Annex Post Office in San Francisco. His article, titled, “Politics and Modernism: The Trial of the Rincon Annex Murals,” examines the political backlash and struggle to preserve the murals.