Thomas Frank is author of a provocative new book, Pity the Billionaire, on how Tea Party Populism derailed a New New Deal. 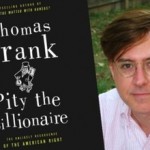 Editor’s note from AlterNet: In  2008, the house of cards came crashing down around us, and all of the economic doctrine we’d been fed over the past few decades was laid bare for all to see. The deregulated cowboy capitalism that was supposed to release unbridled prosperity had led instead to widespread economic pain.  It was a moment ripe for a populist uprising – perhaps a new New Deal would emerge as America elected its first black president in a dramatic rejection of George W. Bush’s business-friendly ideology. But something happened on the way. Instead of FDR, we got Ayn Rand. Rather than calling for programs that might alleviate some of working America’s suffering, we saw the emergence of the Tea Parties, which demanded that ordinary Americans feel every bit of pain they had coming to them – and that we leave the Wall Street hustlers who had precipitated the crash alone.

For the full article, go to http://www.alternet.org/story/153973/why_we_got_ayn_rand_instead_of_fdr%3A_thomas_frank_on_how_tea_party_%27populism%27_derailed_a_new_new_deal