After more than a half-century of indifference, the federal government has become interested in the New Deal art that it commissioned, paid for, and then lost track of. A recovery effort is under way.

At issue are thousands of easel paintings, prints, drawings, and sculptures produced by artists working for the Federal Art Project of the WPA, the Treasury Department’s Section of Fine Arts, and other Depression-era agencies. Some of the works were loaned out to schools, libraries, and government offices; others were haphazardly stored. When the art-funding agencies disbanded with the onset of WWII, their inventories were essentially abandoned—left in place, lost, stolen, sold as scrap, auctioned off as “government surplus,” or simply thrown away. Much of it ended up in private hands.  Now the General Services Administration wants it back.

About ten years ago the GSA began monitoring galleries, auctions, and on-line sales for art with Federal Art Project labels or other identifying marks. On the theory that they still belong to the government, the agency confiscates works that it verifies as New Deal art. Owners are not reimbursed or even allowed a tax deduction. The art is placed in public buildings or given to museums. 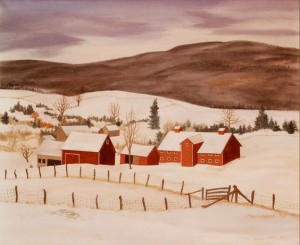 The GSA emphasizes that it steps in only when there is a “sales event” and will not interfere with private holdings. Still, some collectors challenge the whole effort, maintaining that the government relinquished its claim to the art through poor stewardship over the years. They are indignant at what they consider government “seizure” of private property. For its part, the GSA maintains that New Deal art belongs to the American people. (The GSA Art Recovery web page is here.)

This situation presents WPA-art aficionados with a conundrum. For years, passionate individuals documented and promoted the New Deal legacy when few in Washington were interested. Some bought, found, or were given art that nobody else seemed to want, frequently investing in restoring and conserving it. Now that their efforts have helped make New Deal art “hot” again, the Feds show up. On the other hand, people interested in New Deal artifacts tend to believe in public institutions and would probably agree that ultimately these works should find their way back there. The problem may have more to do with the GSA’s approach than with its goal.

It does seem ironic that the GSA is spending scarce resources tracking down small works of variable artistic value while failing to protect the far more significant large-scale New Deal murals and sculptures in the hundreds of post offices and other government buildings that it is allowing to pass into private hands.

One that got away.
The University of California, Berkeley, mistakenly sold a 22-foot- long sculpture by New Deal artist Sargent Johnson as surplus for $150. The buyer sold the work for a hefty profit to the Huntington Art Museum.

One comment on “Who Owns the New Deal’s Art?”