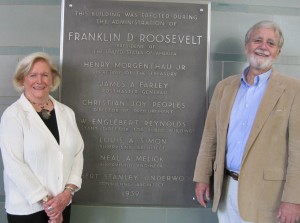 John Boettiger, an author and retired professor of psychology, is the grandson of Franklin and Eleanor Roosevelt. As a boy during World War II, John lived at the White House where his mother, Anna, was a close advisor to the president. While attending Columbia University, he lived with his grandmother joining her in travels on behalf of the United Nations. He is chairman of the board and president of the Christopher Reynolds Foundation. He lives in Mill Valley, California.

Janet Roosevelt Katten is the niece of Franklin and Eleanor Roosevelt and grandniece of President Theodore Roosevelt. As a child, Janet was a frequent guest at the White House and at Val-Kill, her Aunt Eleanor’s home in Hyde Park, New York. Jan grew up outside Detroit. Her mother, Dorothy Kemp Roosevelt, was a political activist and concert pianist who founded the Michigan Orchestra and the WPA Orchestra. Janet majored in music and art at Bennington College and studied architecture at the Institute of Design in Chicago, and later worked as a designer. She lives in San Francisco.

David Rumsey is digital publisher and software entrepreneur. He began collecting historical maps in 1980 and today has one of the largest private collections in the United States. His website, DavidRumsey.com, contains more than 30,000 images, including atlases, maps, globes, manuscripts, maritime charts, and cartographic materials dating from 1700 to the 1950s. David lives in San Francisco.