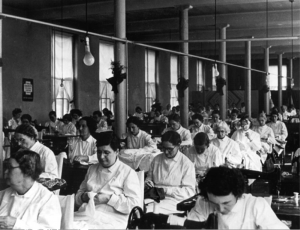 For most people, the name WPA brings to mind images of men laboring on highway projects and building parks and schools, but during the Depression, women, too, were heads of households and in need of employment.  Work programs for women were first established in 1933 through the Women’s Division of the Federal Emergency Relief Administration (FERA), and later came under the Works Progress Administration (WPA). Some women were placed in clerical jobs or worked as librarians, others went to work canning, gardening, and sewing. Nationally, some 7 percent of WPA workers were women engaged in sewing projects. Sewing rooms could be found in rural areas and large cities alike.

In Fort Worth, Texas, for example, the first sewing room opened in 1935. Later, separate sewing rooms were created for white and African American women. Job training was provided. Illiterate women received basic educational instruction. Starting pay was $35 a month for 140 hours work. The federal government paid for salaries, with the city and county paying a percentage of expenses. All the items produced stayed in Tarrant County. 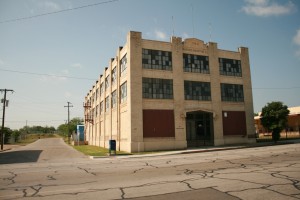 The Fort Worth seamstresses took great pride in their work, proclaiming that the initials “WPA” stood for “We Patch Anything.” They repaired used clothing and created new garments, for which each woman was responsible from beginning to end. Each item included a WPA label with the inscription “Not to be sold.” The finished items were sent to the surplus commodities depot to be distributed to needy individuals—sometimes the women themselves—on the order of city and county welfare workers.

The worker’s average output was two and a half garments a day (not including trim), and included men’s trousers, boys’ coveralls, baby clothes, and diapers. So as not to stigmatize those who were issued WPA clothing, great care was taken to create unique designs. A special department altered stock patterns. The local newspaper noted that one pattern could be used for fifty dresses, yet no two would look alike.

As the United States geared up for World War II, many women found better paying jobs in the defense industries. The WPA sewing rooms were disbanded in 1941, ending a successful and popular program that gave women not only the means to provide for themselves and their families, but also skills, camaraderie, and a sense of self worth.

Susan Allen Kline is an independent historian who specializes in the preparation of nominations to the National Register of Historic Places. She is a Living New Deal research associate based in Fort Worth, Texas.
Email | View all posts by Susan Allen Kline →

4 comments on ““We Patch Anything”: WPA Sewing Rooms in Fort Worth, Texas”