WE DO OUR PART 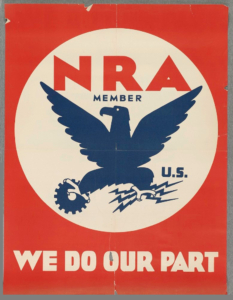 On June 16, 1933, Congress passed the National Industrial Recovery Act (NRA), one of the central initiatives of FDR’s first hundred days as president. Intended to jumpstart the nation’s economic recovery, the act had two parts. The first created the National Recovery Administration (NRA) to halt deflation, assure fair competition, and guarantee the rights of workers. The second established the Public Works Administration (PWA) to rebuild the nation’s infrastructure and get Americans back to work.

The NRA enjoined business to adopt a “code” that included a minimum wage, maximum workweek, and the abolition of child labor. Businesses that went along were permitted to display the NRA’s symbol, the Blue Eagle, declaring “We do our part.”

In 1935, the U.S. Supreme Court ruled that the NRA was unconstitutional, but the agency’s efforts proved ineffective, in any case.  In contrast, the PWA was untouched by the ruling and continued through 1943. During its 10-year existence, the PWA invested $4 billion to construct more than 70 percent of the nation’s schools; 65 percent of its new courthouses, city halls, and sewage-disposal plants; 35 percent of its new public health facilities; and 10 percent of all new roads, bridges and subways.  The vast infrastructure created by PWA workers still serves eighty years on.