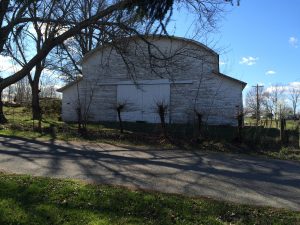 Recently I was in the middle of documenting CCC structures in southern Indiana state forests (more on that in future posts), when I found myself on the old state highway that runs through Little York, a hamlet of fewer than 200 people. The population was about the same in 1935 when the WPA constructed a frame community center for $1907.50 on property adjacent to the school, which is now gone.

Back in the early 1980s I documented this building, part of my yearlong statewide project searching for surviving WPA structures, particularly those having to do with recreation. By that time it was being used for grain and equipment storage and had a huge opening cut into the front of it, which had completely destroyed the original entrance. Then it had a fairly fresh coat of white paint. I would venture a guess that it has not been painted since, and scrubby trees have since grown up in front of the entrance. Animal pens, some occupied, partly surround the building, which is fenced and posted “No Trespassing.” Given the town’s malaise and the fate (demolition) of so many of these New Deal community centers, I was surprised to see that it was still standing at all.
Recreational facilities were among the most prolific projects of the WPA, in keeping with social trends of the time. “Recreation is generally recognized as an efficient tool to combat the demoralizing effects of the Depression. . .  Subsistence alone . . . is not enough,” a WPA administrator affirmed in 1935. Indiana boasted scores of these New Deal-built structures. WPA workers converted any number of abandoned buildings into community centers, or they built new multi-purpose structures, often added to a school so as to benefit the most people with one building. During school hours, it was used for the students. But after school, people could play indoor sports, participate in amateur theatricals and concerts, or attend adult and after-school classes. The entire town likely could fit inside this once-fine community building, which, miraculously, still stands, the townsfolk oblivious to its proud history.
Glory-June Greiff is a public historian based in Indianapolis. She has been researching the work of New Deal for 35 years.
Email | View all posts by Glory-June Greiff →