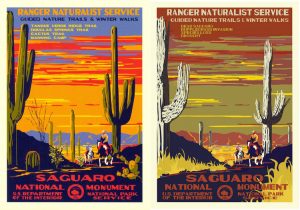 There are many ways to hold up the example of the New Deal in a time of greed, privatization, and creeping social and climatic threats. Celebrating public art and institutions, the USPS released 20 stamps reproducing works by the WPA’s Poster Division. In July, The Living New Deal will exhibit “Building Bridges, Not Walls,” commemorating the San Francisco Bay and Golden Gate bridges as the works of a diverse immigrant nation. (The Bay Bridge was a PWA project, while the Golden Gate Bridge received additions through the WPA.) But how can we both honor our New Deal heritage and adapt its problem-solving spirit for a new century? In National Parks 2050, Hannah Rothstein, a Berkeley-based visual artist, repurposes the New Deal’s visual grammar and rhetorical moves: appreciate our public spaces and rise to the challenge of saving them.

As someone who has been, she told us, long “inspired by the historical arts,” Rothstein, researching the effects of climate change on the parks and working from meticulous reproductions by Ranger Doug’s Enterprises, adapted posters created by the WPA/FAP between 1938 and 1941. Her versions serve a distinct purpose. The original posters advertised the glories of our national parks and monuments to inspire pride and tourism. But speaking to the unique challenges faced in each park amidst an administration unsympathetic to climate change and willing to cede public land to “energy development” (as compared with the parks’ massive expansion and conservation under the CCC), Rothstein replaces stirring and vibrant landscapes with denuded forests, dry lakes, and animal skulls. As she explains in her mission statement, National Parks 2050 draws on “the classic National Parks posters” to suggest “how climate change will affect seven of America’s most beloved landscapes. In doing so, it makes climate change feel close to home and hard to ignore.”

Consider her version of the poster for Saguaro National Monument (now Saguaro National Park, a beneficiary of CCC work). Where the original featured giant saguaros jutting towards a glowing sky of bright oranges, yellows, and blue, two men on horseback navigating a trail dotted with prickly pear and barrel cacti, Rothstein’s version muddies the sky to a pea soup green with dull red clouds, turns the saguaros into desiccated ruins, and swaps out the smaller vegetation for dry scrub. Where the original advertises “Guided Nature Trails & Winter Walks” of different trails and camps in the park, Rothstein’s version advertises “Dead saguaro, buffalograss invasion, species loss, drought,” suggesting what’s in store if we continue on our current path of disregarding ecologically devastating industrialization and consumption. Each of her posters addresses the specific threats facing different parks around the nation.

Rothstein explained that she couldn’t recall her own first encounters with specific New Deal artwork; but she remembers WPA structures from her childhood in Elmira, New York, part of a diffuse cultural landscape that should be familiar to us all. Indeed, she noted that the posters, and WPA art more generally, were “somewhere embedded in my cultural lexicon.” And therein lies her work’s power: Familiar-enough, cherished images that, upon further examination, force us to confront the prospect of a world where our “cultural lexicon” takes on bizarre shadings, producing a tragic new normal. National Parks 2050 is a vision of a fading collective purpose and landscape that we still might salvage if, as she hopes, we are willing to “start dialogue [on this] non-partisan issue.” You can support Rothstein—and the environment—by purchasing prints or originals, with 25% of the proceeds (40% on Earth Day) allocated to climate-related causes. See the project’s page for more information.