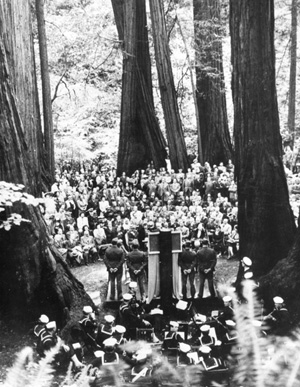 A brass plaque set amidst a towering grove of ancient redwoods at Muir Woods commemorates a gathering there on May 19, 1945.

On that day, seventy years ago, hundreds gathered to honor the memory of President Franklin Roosevelt, who had died a few weeks before, on April 12. They included delegates from around the world who were in San Francisco to craft the Charter for the newly established United Nations. FDR had been the U.N.’s chief advocate.

FDR’s cousin, Theodore, as president, had enshrined Muir Woods as a national monument some forty years earlier. FDR himself had a passion for conservation and a deep knowledge of forestry. One of his first acts as president was to establish the Civilian Conservation Corps, whose enrollees planted nearly 3 billion trees and constructed more than 800 parks nationwide.

The closing speaker at the memorial service was Edward R. Stettinius, Jr., U.S. Secretary of State: “These great redwoods at Muir Woods National Monument are the most enduring of all trees,” he said. “They are as timeless and as strong as the ideals and faith of Franklin D. Roosevelt.”

4 comments on “The World in Muir Woods”