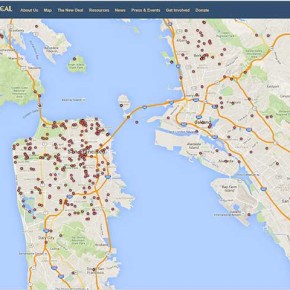 A reminder: When you visit the San Francisco Bay Area, you visit “a landscape transformed by the New Deal.” Writing in this month’s journal of the Association of American Geographers in anticipation of the organization’s meeting in San Francisco this spring, Alex Tarr details the extent to which this is the case—beginning, for visitors, with disembarkation at the airport (both the San Francisco and Oakland airports were the beneficiaries of funds and labor provided by the Works Progress Administration [WPA], the Public Works Administration [PWA], and the State Emergency Relief Administration [SERA]). The (sometimes literal) imprint of FDR’s government is found on sites small (playgrounds and sidewalks) and large (the western span of the San Francisco Bay Bridge, completed by the WPA in 1936).

Tarr holds a Ph.D. in Geography from Berkeley and is now Andrew W. Mellon Postdoctoral Fellow in Spatial Humanities at the Rice University Humanities Research Center. As the former Project Manager for the Living New Deal, he knows his stuff. And he knows us: In introducing readers to Bay Area cities dotted with monuments to a “historical moment when the federal government invested directly in the arts, infrastructure and its poorest citizens,” he credits the LND’s efforts to chronicle and circulate the New Deal’s myriad legacies and lessons.

Nor were all of those legacies without their problems: “From environmental destruction (note how much ‘reclaimed’ land the airport occupies), to the racist representations and exclusions of indigenous peoples in art celebrating California’s colonial history, to the complicated first ‘progressive’ efforts at public housing (coupled with policies that underwrote the mass suburbanization of whites), the Bay Area contains it all.” Indeed, one of the Living New Deal’s concerns is to promote a general public good while not shying away from—instead, to learn from—past injustice. This was, after all, a key component of New Deal-era culture. (Just consider the WPA Slave Narratives.) We’ll keep doing our part. Thanks for remembers your old chums, Alex!