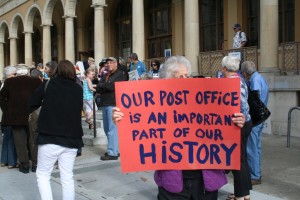 Over at Jacobin Magazine, R. H. Lossin has a scathing takedown of recent attempts to sell off an important piece of our democratic heritage. “Why the Post Office Matters” presents the myth of USPS debt for what it is: A myth, “manufactured” by special interests intent on privatizing post offices, subcontracting their various services to companies like Staples, and reaping the financial benefits at the expense of postal employees. (As Lossin notes, “Precisely because the postal service is quite profitable, a number of corporations would be happy to take responsibility for certain aspects of its operations.”) In any event, the myth has created reality: According to advocate Steve Hutkins, who runs Save the Post Office, there has been a loss of between 60 and 100 post office properties in the past five years. In this thoughtful, wide-ranging piece, Lossin gives due recognition to Living New Deal Founder Gray Brechin, whose Save the Berkeley Post Office has won a major victory for historic preservation and civic mindedness at large.

What is lost when these sites, with their New Deal murals, are gone? As Lossin argues, “The art itself ranges widely in content and style, depicting nostalgic country view, the aftermath of the Civil War, and scenes critical of capitalist exploitation. More than a mere byproduct of privatization, the disappearance of New Deal artwork from the public sphere is an active repression of the knowledge and memory of social alternatives — a sort of negative propaganda in the service of neoliberalism.” Because the murals are federally protected as “interior landmarks” they will remain intact. But does their meaning change if, say, they grace the walls of the local Restoration Hardware (the fate of the historic Greenwich, Connecticut, post office) instead of a public space dedicated to a truly democratic attempt to connect people and places regardless of the bottom line?