It’s well known that there are some WPA murals in Bronx’s DeWitt Clinton High School, notably one called “The History of the World”.  But who knew it was a monumental work 194 feet long?  One thousand square feet in total, it is a kind of Sistine Chapel of New Deal artworks.

Every square inch of the upper half of the walls is covered with images that truly do attempt to present a History of the World from creation through prehistory; across the ancient civilizations of Egypt, Assyria, Persia, Greece, ad Rome; covering the middle ages, pre-Columbian America, the Vikings, the Crusades, and several of the world’s great religions; and finally the New World, conquest and colonization, and wars, all the way up to Modern Times (the 1930s).  Above all this, the entire ceiling is done as the night sky with its constellations.

“The History of the World” mural was the product of six solid years of work by Alfred Floegel, and is his masterpiece. Floegel was an out-of-work German immigrant artist employed from 1934 to 1940 by New Deal agencies, including the Works Progress Administration (WPA).  While it may be a bit Western-centric by modern standards, the mural is still remarkably diverse for its time, a hallmark of many New Deal artworks. 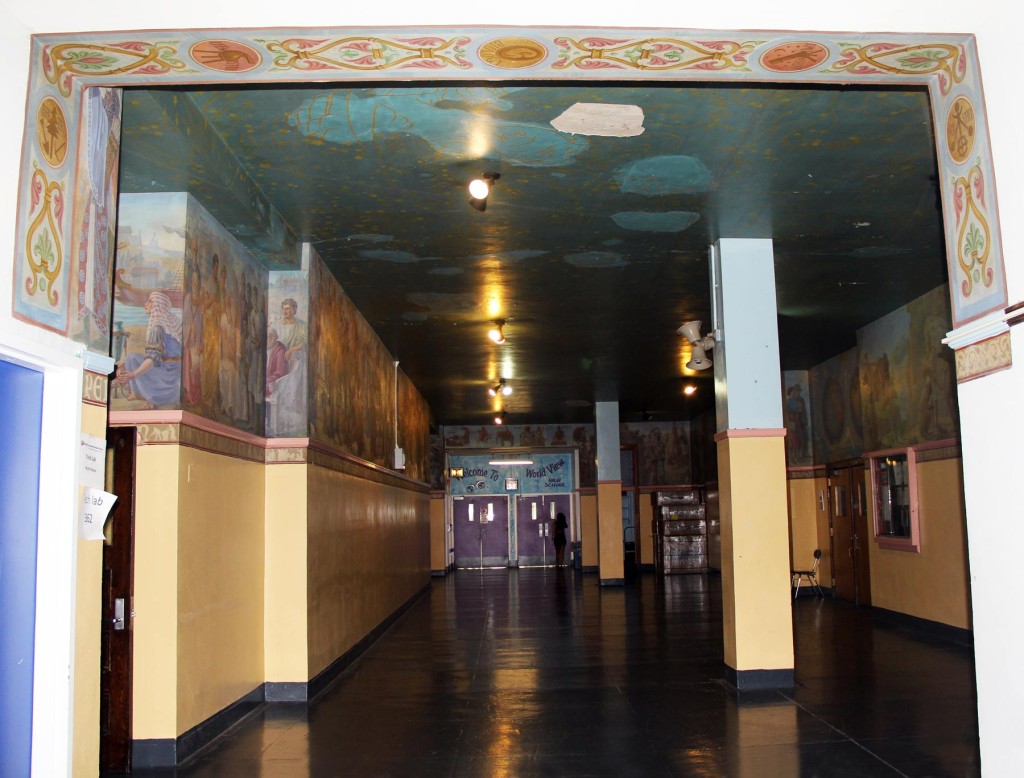 The magnitude of the work wasn’t my only surprise.  The Principal of DeWitt Clinton, Santiago Taveras (Santi), had recently been visited by Floegel’s son, who is about the same age as the murals. Alfred, Jr. was on a pilgrimage to see his father’s greatest work. He left some clippings, photos, and handwritten notes with Santi, who shared them with me.

I did my best to photograph the entirety of the mural and some samples of the ceiling, but a proper job would require elevated platforms and special lighting.  It’s a job that should be done before this unique work goes the way of so many other WPA murals and is damaged, painted over, or lost in a building reconstruction.

One comment on “The History of the World in One Mural”