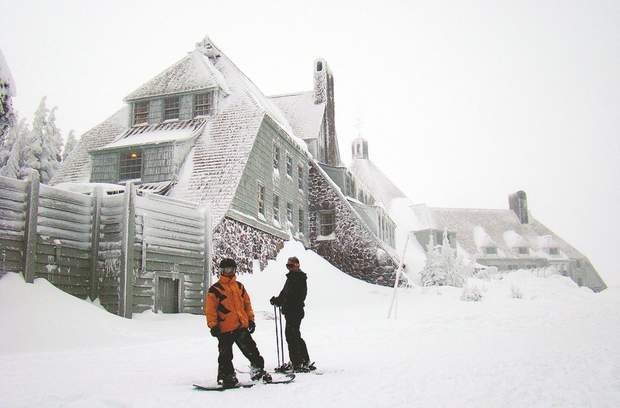 Timberline Lodge
From the Bend (Oregon) Bulletin: “Timberline Lodge looms ghost-like over a snowboarder and skier near the top of the Pucci lift at the Timberline ski area. The only ski-in, ski-out winter lodge in the Pacific Northwest boasts the longest ski season in North America, closing only during October for maintenance.
Photos by John Gottberg Anderson / For The Bulletin”

Here’s some fascinating history, from John Gottberg Anderson of the Oregon-based Bend Bulletin:

“Seventy-five years is a ripe old age, one that isn’t achieved without a few battle scars.

There was a time when the historic Timberline Lodge, on the north slope of Mount Hood, didn’t appear likely to survive its teenage years.

Built at the 6,000-foot level of Oregon’s tallest peak by the Depression-era Works Progress Administration (WPA) in 1936 and 1937, the hotel and ski lodge initially flourished. But it closed when the United States entered World War II, and failed to regain the popularity of its honeymoon period once the war was over.

By the mid-1950s, having degenerated under mismanagement into a den of iniquity — one that turned a blind eye to gambling and prostitution even as it left many of its bills unpaid — Timberline was threatened with permanent closure… ”