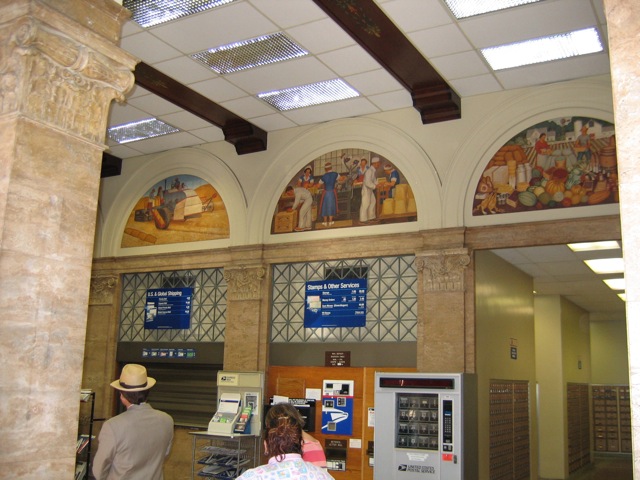 The superb post offices of the New Deal era are a monument to America’s democratic ethos. Now we’re selling off FDR’s legacy

On 9 June, the General Services Administration threw Modesto’s downtown post office onto the auction block. Like so many other postal facilities, the Renaissance-style palazzo had long served as an anchor for downtown stores of the California town, a public space where citizens met to exchange news as well as transact business in an ennobling lobby of polished travertine and marble beneath murals of local farming activities.

The federal government once designed its post offices to elevate and inspire the public whose assets it is now selling. An architectural journal in 1918 spoke of the tutelary value of post offices:

“They are generally the most important of the local buildings, and taken together, [are] seen daily by thousands, who have little opportunity to feel the influence of the great architectural works in the large cities.”

President Hoover’s administration built facilities such as Modesto’s in a last-ditch effort to end the Depression, before Franklin Roosevelt’s New Deal unleashed a far greater torrent of public works that succeeded where Hoover had failed (pdf). In less than a decade, the Roosevelt administration built over 1,100 post offices, distinguished by fine architecture, materials and detailing, as well as by a lavish programme of public art that, for the first time, reflected back to patrons and workers their regional identity.

Mandated by the US constitution as a service vital to democracy, the post office has fallen victim to structural adjustment as well as to electronic communication. Congress has successively demanded that the US Postal Service run itself more like a business since making it a quasi-corporation in 1971. Required to provide universal service, even as the internet and private carriers cut into its profit centres, the USPS has spun into a death spiral, raising its rates as it slashes employment and service. It’s now stripping its assets, as well.

Since January, the US Postal Service has closed 280 post offices, despite community resistance and the objections of local business people horrified to watch downtown magnets decamp for peripheral strip malls and trailers. Those closures were only a warmup for what was coming. On 26 July, Postmaster General Patrick Donahoe listed nearly 3,700 more, saying “The Postal Service of the future will be smaller, leaner, and more competitive.” Those facilities constitute well over a tenth of the nation’s post offices, buildings that once physically embodied government honesty, efficiency and even culture. Perhaps, that is why they must go.

The distinguished Modesto building, like many other New Deal post offices, has earned a place on the National Register of Historic Places, but a buyer could still demolish it to utilise the real estate beneath it. In that case, law requires the developer to donate its murals to the federal government. But as Congress and the White House hack ever deeper into the services that Americans until recently took for granted, no one may be at home in Washington to find lodging for such art other than that for which it was made.

New Deal critic Amity Shlaes has claimed that “It’s not really the government’s business, art, is it?” Roosevelt shared with other New Dealers a considerably more expansive notion of what the US could achieve. He forecast that “one hundred years from now, my administration will be known for its art, not for its relief.” The New Dealers envisioned a new Renaissance. Its successors are knocking that legacy down to the highest bidder, and with it goes what we once were and might yet be.