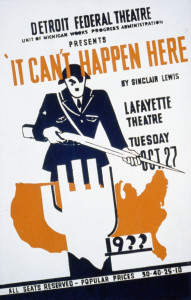 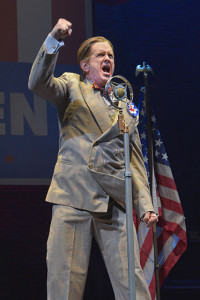 Sinclair Lewis’s 1935 novel, It Can’t Happen Here, tells the story of a demagogic, racist politician who wins the presidency and transforms the US into a brutal dictatorship. Within a year of its publication, the New Deal Federal Theatre Project adapted Lewis’s work for the stage, with opening nights synchronized in theaters nationwide on the eve of the 1936 elections.

Though timely, the play was not a great artistic success; as Susan Medak, managing director of the Berkeley Repertory Theater, puts it, the original was “ghastly.”  So Artistic Director Tony Taccone and collaborators set out to improve and update the play for the regional theater in Berkeley, California, noted for introducing such successful productions as “Angels in America” and “American Idiot”.  In Taccone’s view, the story’s themes present parallels with today’s political climate that are too close to ignore.

With approval from the Lewis estate, the Berkeley Rep is mounting a new stage version of It Can’t Happen Here, timed to coincide with this year’s election. As you can imagine, the 2016 version has generated lots of buzz, and Berkeley Rep hopes to bring that momentum to America at large through free public readings around the country.

Click here to find theaters already signed up to participate in the reading or to get your community theater involved.