An Outhouse for the Ages 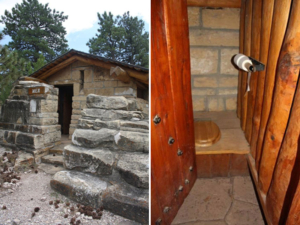 After reading about the “Million Dollar Privy” in Guernsey State Park, I had to see it for myself. The park surrounds the Guernsey Reservoir on the North Platte River in southeast Wyoming and is part of an extensive National Historic Landmark District for its design history and construction. The CCC labored at the park from 1934-1937. Its work includes hiking trails, campgrounds and stone buildings considered some of the best CCC structures in the West. My favorite is a massive stone outhouse that received its nickname because it took a long time to build and cost a lot of money…for an outhouse. Stone buttresses outside look like they could withstand a major tornado and huge timbers frame the stalls inside.
— Pete Tannen, San Francisco

The Black Mountain Lookout Tower was built by the Civilian Conservation Corps (CCC) and was completed in 1940. The tower is 14′x14′ with a catwalk on a stone foundation. It functioned as the lookout for the north end of Bighorn National Forest. No longer in use, the tower remains a popular hiking destination.

In the summer of 2014 the U.S. Forest Service partnered with non-profit HistoriCorps to sponsor extensive rehabilitation work on the tower. Volunteers completed a variety of tasks with the intention of the tower becoming a rental cabin or interpretive site.