Landscape architect Horace Cleveland, known for his leadership in developing the Twin Cities’ park system, set aside the land now known as Hidden Falls Regional Park in 1887. The spring-fed waterfall is indeed “hidden” in a small ravine on the north end of the park, on the east bank of the Mississippi River. The falls feed into a small creek, which runs south into the Mississippi.

The park stayed largely undeveloped until the WPA constructed a stone staircase leading from the falls up to the East River Parkway and a lookout area at the top of the river bluff.

The El Dorado Springs “old” Gymnasium and a series of classrooms were completed in 1939 as a project of the Federal Works Agency of the Public Works Administration in 1939. The gym and attached classroom building is a red brick structure designed to harmonize with the old high school (destroyed by fire). The gym features a full stage complete with a second story property room and “crow’s nest”, as well as downstairs locker rooms. The lower walls of the gym and hallways are covered with pumpkin-colored oblong tiles, with plaster to the ceiling.

Following several decades of few to no substantive changes to the space, the school district has replaced the ceiling tiles in the gym area, as well as sealing off the original clerestory windows on the west wall and climate controlling the space.

The classrooms and gym are now a part of the current middle school section of the K-12 complex that was built around the 1939 structure in the 1950’s and 60’s.

Duluth’s National Guard Armory, built in 1915, received a significant expansion through the Works Progress Administration on the eve of World War II. Minnesota’s WPA administrator, Sidney L. Stolte, announced the plans to “increase the size of the building, provide new meeting rooms, and extend the stage easterly” in the fall of 1940.

Architect Philip C. Bettenberg drew up the plans. Bettenberg had already designed armories throughout Minnesota, including those in Minneapolis and Brainerd.

A rift between the city and state regarding what type of curtain (steel or asbestos) should be used for the stage delayed the project. Construction was further postponed in February of 1941 due to growing hostilities abroad. Duluth’s National Guardsmen were quartered at the armory for mobilization.

The project finally began in April. The $95,896 expansion included a stage, classrooms, a kitchen, and restrooms, and it was completed by the end of 1941.

As the country’s furthest inland port, Duluth prepared the armory for possible attack during World War II with blackout screens and lightproof paint.

In May 1942, 1,800 Duluth high school students hosted the first event in the new space. The choir of 1,100 students and a 90-piece student orchestra performed to raise money for the war effort. 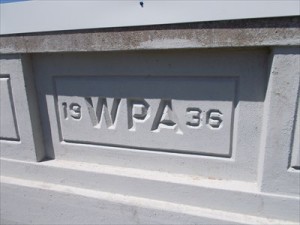 Built by the WPA in 1936, the pedestrian tunnel provided safe passage under U.S. Highway 66, and was used by children to get to an elementary school on the west side of the highway. The school no longer stands and this section of former Highway 66, now Rock Island Avenue, carries only local traffic.

Multiple New Deal agencies were involved with improving the grounds at the Alamo.

A timeline mural board on the west side of the Alamo Museum indicates that “depression-era public works projects” built the walls that now encompass the grounds of the Alamo in San Antonio, Texas. The Alamo is regarded as the “Shrine of Texas Liberty” due to its location of the famous battle within its perimeter during the Texas Revolution; however, it was originally the site of Mission San Antonio Valero which was moved here in 1724 after several previous locations in the area were not suitable.

The New York Times reported: “Unsightly buildings which have stood for years adjoining the Alamo to the south are being demolished, and the property on which they stood will be converted into the Alamo State Park. The work of razing the buildings and beautifying the park is being paid for by CWA funds.”

The caption from a photograph in the September 1934 San Antonio Light reveals that FERA built the Roman-style stone arches that now run south from the façade of the Alamo chapel and built the garden area behind the chapel. Further research indicates that WPA and NYA workers built a wall around the perimeter of the grounds, the museum building, and demolished several old buildings on the property including the old central fire station where the DRT Meeting Hall would be built (this was previously submitted). Some sources suggest that restoration of the acequia that runs through the property may have been funded with federal funds.

From the Minnesota Historical Society:

“The Clarence W. Wigington Pavilion, formerly known as the Harriet Island Pavilion, is significant in St. Paul’s recreational history as a well-preserved example of the work of Clarence Wesley Wigington, the first black architect hired by the city.

Wigington, the architect of that pavilion, had lived in Nebraska and Wyoming before moving to St. Paul in 1915. Scoring highest on the civil service test for a position with the city architect’s office, Wigington was hired as St. Paul’s first black draftsman. He later became the city’s chief design architect, creating several prominent buildings between 1915 and 1949. Outstanding among his designs, the pavilion on Harriet Island combines simple Moderne styling with classical influences, a stylistic mix typical of many WPA projects.”

In 1937, the Works Progress Administration came out and installed an outhouse at the farm where I now live. Apparently the farmhands were just going in the fields. To make it more sanitary, the WPA put in a beautiful little building, complete with two toilets, side-by-side, with wooden seats, covers that closed, and a concrete urinal. It’s in remarkably good shape for being almost 80 years old. It even had electricity and a light so you could go at night!

“1939: WPA began work on road construction and developing a forest lodge. The lumber came from this forest and shakes came from the Lake Elba prison camp at Rhinelander. Rip-rap came from the Jambo Creek area. Tree planting also began this year with 475,000 trees planted, mostly red pine but also 5,000 white pine and 2,000 spruces.”

From “Joseph W. Soit and the Establishment of Point Beach State Forest”:

“Sometime after the land was purchased [1937] a CCC camp was to have been established but it did not work out. Then the WPA project was organized. Even with that we had trouble in the beginning. The story that the Conservation Department had, there was no labor available in Two Rivers even though we had many men unemployed and on relief. A committee went to see Mr. Harrington and soon after the WPA project was under way to clear the underbrush and what else was needed. Plans were made for the road and recreational building. There were quite a few unemployed in Two Rivers and vicinity. At one time there were some 12 workers on the WPA project. August 1940 the administration building was completed and also now the road built (not black-topped as it is now).”