In 1939 the Works Progress Administration (WPA) constructed an athletic field at Portland’s Franklin High School as part of a larger commitment ($468,459) to the improvement of Portland public school properties.

Daniel Celentano completed this oil-on-canvas mural, entitled “Children in Creative & Cultural Activities,” in 1940 through the Works Progress Administration (WPA). It is currently located in the auditorium of P.S. 150 in Queens. 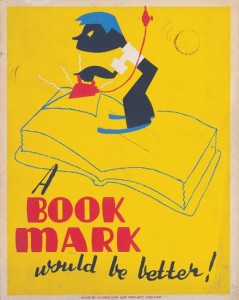 The New Deal cared a lot about books–producing, consuming, maintaining them.  SourceWordPress, 2010

I recently completed a new project for the Living New Deal: a list of about 1,500 writings, created between 1935 and 1943, by the Federal Writers’ Project and the WPA Writers’ Program. The writings include both published and unpublished items, and the titles came primarily from two sources: a list compiled by a Florida book seller in the 1970s and a list created by a private firm working in collaboration with the Library of Congress in 1987. Our list, which also includes contemporary scholarship, is organized alphabetically—by state and then by title—and uses a similar (but even more basic) style as the sources listed above. The goal was to make it reader friendly.

I learned two things while I was working on this project. First, creating an inventory of 1,500 writings is somewhere between less-than-fun and merciless torture. The second thing I learned is that the writers of the WPA wrote on a stunning variety of topics – even more topics than I had thought. We’re all familiar with the popular American Guide Series, detailing attractions and history in all states and select cities. But consider some of these other titles, which speak to local interests and idiosyncrasies: National Guard of Wyoming, Wisconsin Circus Lore, Churches of Roanoke, Baseball in Old Chicago, Recreational Activities: Christmas Tree Ornaments, Winter Hikes, Air Raid Warden’s Manual, Seminole Indian Canoes, and Gumbo Ya Ya.

And, really, this list has plenty of room to grow. For example, we could add research reports by WPA workers (traffic studies, disease studies, hydrographic surveys, etc.); books transcribed into Braille by WPA workers; or inventories of church records created by the WPA’s Historical Records Survey to name a few. Or our list could evolve into a larger “New Deal Inventory” that would include reports and writings by the Civilian Conservation Corps, the Federal Emergency Relief Administration, and more. How large could such a list grow? 3,000 items? 4,000? 10,000? Perhaps one day we’ll have a list of every report, publication, manuscript, bulletin, and inventory made by FDR’s alphabet soup of agencies. Check out what we already have in our Bibliography.

This stone and concrete grandstand was constructed by local Stevens Point workers in 1938 with money from the Works Progress Administration (WPA) to provide a venue for viewing football games. It is located in Goerke Park, a 26-acre sports park located near P.J. Jacobs High School, also built by WPA workers. It is still in use today.

This was one of five monumental senior high schools built in Fort Worth with the aid of New Deal programs. It was designed by Fort Worth architect Wyatt C. Hedrick in an eclectic Spanish Baroque style and features yellow brick and a clay tile roof. Funding for the building came through the Public Works Administration (PWA). The grounds of the school were landscaped by Hare & Hare of Kansas City, Missouri, with the work implemented by the Works Progress Administration (WPA). The heavily-treed campus includes a band shelter with stage that was built by the WPA.  The school has been enlarged over the years.
The school was designated as a City of Fort Worth Historic and Cultural Landmark in 2003. Also on the grounds is an Official Texas Historical Marker honoring Amon G. Carter (1879-1955) for whom the school was named in 1941. Carter was editor of the Fort Worth Star-Telegram, a businessman, philanthropist, and Fort Worth’s biggest booster.

Charles E. Nash Elementary School was originally constructed in 1927 and received a small addition in 1936. It’s likely that the addition was completed as the result of New Deal funding, but that has not been verified. It has been verified that the grounds were landscaped through the Works Progress Administration (WPA). Among the improvements were these terraces and stairs on the north side of the grounds constructed circa 1936. The improvements were designed by Hare & Hare of Kansas City, Mo.

Rose City Golf Course, constructed adjacent to a middle-class residential development in 1923, was the second public golf course in Portland and the state of Oregon. In 1937, the Works Progress Administration (WPA) redesigned the first nine-holes, rebuilding the greens and lengthening the course by 450 yards, and added rock walls and stone curbs along 72nd Drive.  Local basalt rock served as the landscaping material, as was the case in many WPA projects.

City of Portland records indicate that approximately $38,000 was spent by the WPA on the Rose City Golf Course landscaping and redesign. WPA funding for these improvements was part of a larger effort on the part of the city’s Supervisor of Parks, Charles P. Keyser, to maintain services to Portland residents as the Depression had a debilitating effect on park development for over a decade.

Nevertheless, to the best of our knowledge, there is no plaque or other sign on the grounds to indicate the federal aid to the city parks department during the New Deal.

(Note: we are not sure that the photographs here are of the portions of the course improved by the WPA workers)

Works Progress Administration (WPA) workers provided landscaping improvements to the Eastmoreland Golf Course, the City of Portland’s oldest municipal course, during 1937. The $26,348 project budget was made up almost entirely of labor costs. As a Parks Bureau report notes, Parks Superintendent Charles P. Keyser took care in the use of relief funds to expand the City’s budget since “they could be expended only for parks improvements or expansions, not maintenance of existing facilities” (p. 31).

The exact nature and location of the improvements are unknown to us.

Arlington Heights Senior High School was one of five monumental high schools built in Fort Worth, Texas through the Public Works Administration (PWA). It was designed by local architect Preston M. Geren and built by Butcher and Sweeney in 1936-37 in the Georgian Revival style. The three-story central block is flanked by one-story arcaded wings.

The landscape improvements were designed by Hare & Hare of Kansas City, MO and implemented by the Works Progress Administration (WPA). The large campus was given a park-like treatment with a formal reflecting pool in front of the school and a long vista extending south from the rear. Also included were an amphitheater and small shelter. Due to additions the building has received over the years and the construction of the freeway in front of it, many of the landscape features have been lost.

North Hi Mount Elementary School was constructed in 1934-35 with funding from the Public Works Administration (PWA). It was designed by local architect Wyatt C. Hedrick in a Spanish/Mediterranean Revival style. The picturesque building is complimented by a beautiful stone terrace and stairs designed by Hare & Hare and constructed by the Works Progress Administration (WPA). The three-dimensional quality of the stone work greatly enhances the walls of the terrace.
The building has received sensitive additions over the years and is designated as a City of Fort Worth Historic and Cultural Landmark. It is among a handful of historic school buildings that retains its original windows and its status as a local landmark will preserve the building’s character-defining features.
Page 1 of 512345