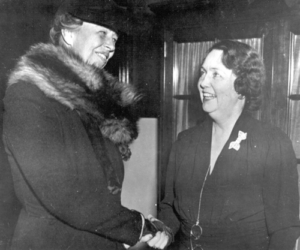 First Lady Eleanor Roosevelt and Ellen Woodward, 1938
During the New Deal Woodward served as the director of the Women’s Division of the Federal Emergency Relief Administration (FERA); director of the Women’s and Professional Projects of the WPA; and as a member of the Social Security Board, She was considered “the second highest ranking woman appointee in the Roosevelt Administration, after Frances Perkins.
Photo Credit: Courtesy, National Archives

When millions of Americans lost their jobs, homes, and life savings in the 1930s, Franklin Roosevelt promised them a new deal. A new book, “Women and the Spirit of the New Deal,” reveals the extensive role women played in shaping government’s all-out response to the Great Depression.

Inspired by a conference in 2018 at UC Berkeley, the book is a collaboration of the Living New Deal, the National New Deal Preservation Association, and the Frances Perkins Center to recognize the oft-overlooked female forces behind the New Deal. In brief biographies, it describes one hundred women who shaped the policies and programs that led to America’s economic recovery and protected its most vulnerable.

At a time when society held that “a woman’s place was in the home,” these women expanded the aspirations of the New Deal. They included politicians, administrators, lawyers, social workers, authors, journalists, painters, sculptors, musicians, and scientists. Some are well known like First Lady Eleanor Roosevelt, Secretary of Labor Frances Perkins, and educator and civil rights activist Mary McLeod Bethune. Some have been largely overlooked, like political activist Molly Dewson and Clara Beyer, an administrator in the Bureau of Labor Statistics who played an important role shaping legislation to provide worker safety, a minimum wage, and Social Security. 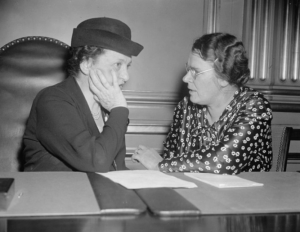 Frances Perkins and Clara Beyer
Secretary of Labor Perkins was the first woman ever appointed to a presidential cabinet. Beyer was an attorney and associate director in the Division of Labor Standards. She was part of a so-called “Ladies’ Brain Trust,” that advised Perkins during the 1930s and 40s.
Photo Credit: Courtesy Mt Holyoke College

The book is just a beginning. If you know of women who had a part in the New Deal, please share their stories with us so that we may pass on the spirit they brought to the New Deal to inspire a new generation.