Each mural depicts a major Vermont industry: Recreeation; Quarrying; Dairying; and Sugaring. Each murals measures 5′ wide by 8′ tall and is painted in “oil on special material.” They were to be installed in Vermont Pavilion at the Eastern States Exposition in Springfield, MA, in September 1941. Their present whereabouts is unknown.

A 1941 Burlington Free Press and Times article reads, “Gov. William H. Willis and Pierre Zwick, director of the Vermont art project of the  WPA, are shown here standing in front of four murals, depicting the major industries of the state, to be placed at the Vermont pavilion of the Springfield, Mass., exposition in September.”

“Crystal Lake State Park consists of the park’s recreational area, the bathhouse, and the thin strip of beachfront land along the northern border of Crystal Lake in Barton, Vermont. Crystal Lake is a glacial lake nestled between the mountains and it is about three miles long and one mile wide. The park has a half a mile of sandy shoreline that extends along the north side of Crystal Lake and there is a marked swimming area with a sandy beach in front of the bathhouse. David Fried designed the bathhouse for the Vermont Forest Service in cooperation with the National Park Service. It serves as the architectural centerpiece at Crystal Lake State Park, and the Civilian Conservation Corps provided the labor for the bathhouse and the park’s construction. The bathhouse was dedicated in a ceremony on July 4, 1942 and has been used as a bathhouse for local townspeople and tourists ever since. The park was listed in the National Register of Historic Places on August 30, 2005.”   (NRHP Nomination Form)

Vermont Public Radio, on uncovering the role of the CCC’s 40,000 N 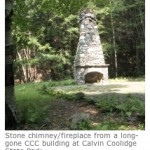 ew Deal employees in that state: “It’s hard to comprehend the immensity of the Civilian Conservation Corp’s work in Vermont State Parks. At Little River State Park, for example, just below the huge earth-fill dam that creates the Waterbury reservoir was located the largest CCC camp in the East. Earlier this year, park volunteer Ann Imhoff and I walked for about a mile through the woods, seeing old stone chimneys, old foundations and wells. The camp just went on and on. It had churches, a theatre, a hospital, – and was home to more than 3,000 young men who built the huge Waterbury dam. There were more than 40,000 CCC men in Vermont in the mid-1930s, and they made an immense impact on this state.”