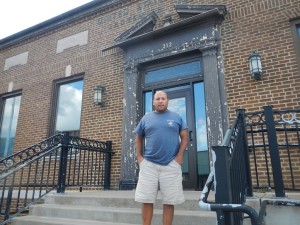 A self-described “post office freak,” Chicago native David W. Gates Jr. is on a mission to document the nation’s post office art. The idea came to him during a river rafting trip when he and his friends came upon an unprepossessing post office in Athelstane, Wisconsin, and used it as backdrop for a group photo. Thereafter, David began to take notice of post offices, especially those in small town America.

The tiny post offices along the route were David’s lifeline during his 6-month journey through the Appalachians. Retrieving the supplies he had mailed to himself via “General Delivery” before starting out led David to post offices in Erwin, Tennessee; Hot Springs, North Carolina; Front Royal, Virginia; Pearisburg, Virginia; Harpers Ferry, West Virginia; Damascus, Virginia; Boiler Springs, Pennsylvania; Glen Cliff, New Hampshire; Caratunk, Maine; and Andover, Maine. He’s been photographing and writing about post offices ever since. His website, Postofficefreak.com, includes nearly 800 blogs about his post offices encounters.

David had originally planned to photograph as many post office buildings as he could, but has since narrowed this quest to documenting New Deal post offices. Many, he found, have been shuttered or sold. 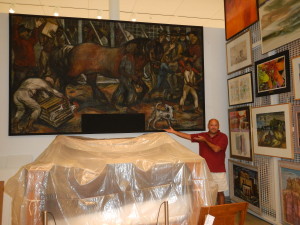 “Unloading a River Barge” by Ruth Grotenrath, 1943.
Gates searched for the mural in the former Hudson, Wisconsin, Post Office. He found it in storage, no longer viewable by the public. The post office, built in 1939, was sold and is now a restaurant.

New Deal murals and sculpture in post offices were produced between 1934 and 1943 under the Treasury Department’s Section of Painting and Sculpture, later called the Section of Fine Arts. The purpose was to boost the public’s morale during the Great Depression with art that, in the words of President Roosevelt, was “native, human, eager and alive — all of it painted by their own kind in their own country, and painted about things they know and look at often and have touched and loved.”

According to the U.S. Postal Service’s website, “more than 1,150 post offices across the continental United States house this uniquely American art for people to enjoy as they go about their daily lives…The United States Postal Service is making every effort to preserve and safeguard it for future generations.”

That’s not what David says he found. “New Deal artworks that belong to the public are no longer available for the public to enjoy,” he says. “Many of these works have been removed, locked away, and even painted over.  I want to record them before they disappear.”

David recently published a guide to Wisconsin’s 35 New Deal post offices, “so that people can know what’s out there.”

To learn more go to www.Postofficefreak.com