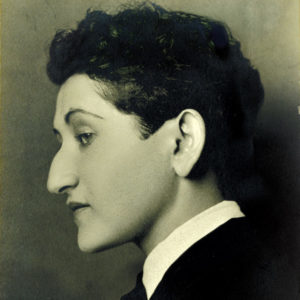 Born in Mexico in 1905, Anita Brenner, a Jewish American writer and intellectual, lived her life on both sides of the border.

Educated in Mexico and the U.S., Brenner explicated Mexican culture to Americans, offering an antidote to the biases that shape relations between the two nations to this day.

Brenner’s family left their home in Aguascalientes, Mexico, for Texas in 1914 to escape the violence of the Mexican Revolution. After the war, Anita moved back to Mexico City on her own and was introduced into an international community of artists, refugees, and intellectuals living in the capital. 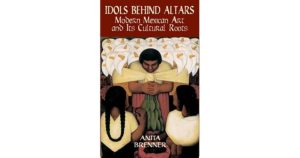 Idols Behind Altars
Brenner wrote several books and hundreds of articles about Mexican art and culture.

Returning to the U.S., she completed her doctorate in Anthropology at Columbia University in 1930. At age 24, she published Idols Behind Altars, the first study to document the artworks, styles, and artists of Mexico, from early indigenous peoples up to the Mexican Renaissance, in which many of her friends and partisans played a role.

Brenner was excited by the New Deal and its support for artists. She saw Mexican influence in the art emerging from the New Deal’s Works Progress Administration. Like the Mexican artists whose work responded to the social inequity in that country, New Deal artists, too, reflected the lives and travails of ordinary people coping with the Great Depression. 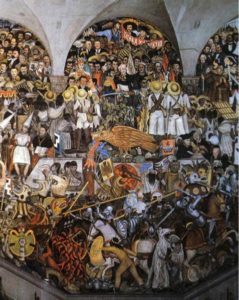 This History of Mexico, 1929-1935
Rivera’s murals depicting the struggles of campesinos influenced artists of the WPA.
Photo Credit: Wikiart

WPA muralist George Biddle acknowledged Brenner’s influence on his work. “I had sucked to the pulp all the wisdom and scholarship of Anita Brenner’s Idols Behind Altars, so that I felt a certain sympathy and understanding of the ideology, the causal circumstances, the germination and the quick tropical flowering of the Mexican School,” he wrote.

Brenner discerned what she called the “New Deal spirit” in the work of the WPA artists. Of the celebrated painter Joe Jones, who then worked for the WPA, she wrote, “You can see it in his grin, in the pattern of his vigorous brush, in his truculent exuberance; you can see that he knows the future belongs to him,”

As an art critic, Brenner enthused that the WPA artists had “more skill, more freshness, and incomparably greater feeling” than the other graphic artists in a Brooklyn show.

She was not uncritical. She once described herself as a “best friend with sad news” in reviewing a WPA easel show that she said lacked “vigor and freshness.”

In an article for The Nation in 1934, Brenner cautioned artists working for the New Deal against the “safe isolation which capitalism develops, in various forms, to protect itself from the honest, invincible courage indispensable to great art.”

When the WPA faced budget cuts in 1936, she wrote, “we can almost take it for granted that the most important things that have happened in our arts these years are the achievements of the artists on the WPA projects.” 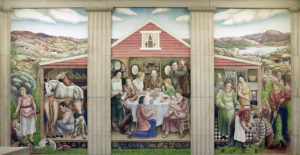 Society Freed Through Justice
The influence of Diego Rivera is evident in Biddle’s five fresco panels for the Department of Justice Building in Washington, D.C.
Photo Credit: Library of Congress Prints and Photographs Division

Brenner’s 1943 book, The Wind That Swept Mexico, The History of the Mexican Revolution, told, from a Mexican perspective, the struggles behind the civil war. It was her response to the version of events Americans got from their newspapers—particularly those owned by William Randolph Hearst, whose ownership of millions of acres of Mexican land was endangered by the Revolution.

Brenner later edited Mexico/this month, a magazine about the culture and history of the country she loved.

She died in car accident in Mexico in 1974, ending a prolific life that, for a time, bridged the persistent cultural divide across the Rio Grande. 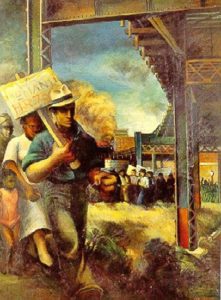 We Demand, 1934 by Joe Jones
The WPA painter embodied the “New Deal Spirit.”