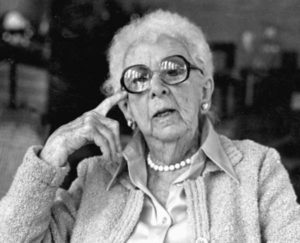 “It is as if there were places and times in which human activity becomes a whirlpool which gathers force not only from one man’s courage and ambitions and high hopes but from the very tides of disaster and human foolishness which otherwise disperse them.”

“A whirlpool which gathers force.” Interestingly, these words were written by Marjory Stoneman Douglas–the namesake of the school in Parkland, Florida, where in February, yet another shooting massacre took place. 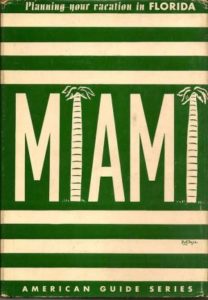 American Guide to Miami
Published under the auspices of the Federal Writers’ Project, the American Guide Series contains detailed histories of each of the then 48 states and major cities and towns.

Douglas, who died in 1998 at the age of 108, might have been describing the student activists who have taken up the fight against the NRA and the politicians who support archaic gun laws. But Douglas’s words appeared in the foreword she wrote to the 1941 edition of A Guide to Miami and Dade County, one of the books in the Works Progress Administration’s American Guide series.

The WPA guides, published by the New Deal’s Federal Writers Project between 1935 and 1943, were intended to create jobs and spur tourism during the Great Depression. The FWP hired thousands of unemployed writers, librarians, clerks, researchers, editors, and historians around the country—including Douglas, a journalist, and activist throughout her long life.

Douglas is best known for her tireless crusade to save the Florida Everglades. But throughout her life, she also supported such causes as women’s rights, civil liberties, and racial justice. 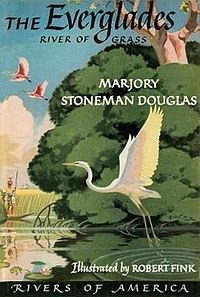 The Everglades, River of Grass
Douglas’s book, published in 1947, the same year that the Everglades became a national park, remains a call to action.

She was a suffragette at Wellesley College, and actively fought for women’s right to vote until the 19th Amendment was enacted in 1920. Arriving in South Florida in 1915 when barely 5,000 people lived in Miami, she began her career as a society columnist for her father’s newspaper, which later became the Miami Herald.

Like Henry Alsberg, director of the FWP and editor of the WPA American Guide series, Douglas spent time in Europe after World War I aiding war refugees. Upon returning to Florida, she turned to covering social and environmental themes, including the importance of preserving the Everglades and its ecosystem.

Douglas, who stood 5 foot 2 and weighed barely 100 pounds, famously did battle with the Army Corps of Engineers, the State of Florida, and powerful business interests over draining the Everglades for agriculture and real estate development. Her 1947 book, The Everglades: River of Grass, still considered groundbreaking, “galvanized public interest in protecting the Everglades,” according to the Florida Department of State. In 1969, at age 79, Douglas founded Friends of the Everglades.

When she was 103, President Bill Clinton, calling her the “Grandmother of the Glades” presented Douglas with the Medal of Freedom. Still-wild portions of the Everglades are named in her honor. At a ceremony on Earth Day, 2015, Douglas’s home in Dade County, Florida, was listed on the National Register of Historic Places. 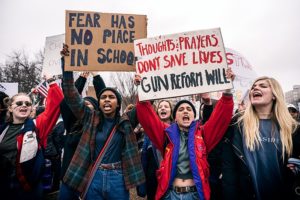 But more than these “official” honors Douglas would surely be proud of the students who hail from Marjory Stoneman Douglas High School for carrying on her efforts to build a better world.

“Be a nuisance where it counts,” Douglas once said. “Do your part to inform and stimulate the public to join your action. Be depressed, discouraged, and disappointed at failure and the disheartening effects of ignorance, greed, corruption, and bad politics—but never give up.”

John Rothchild, who helped write Douglas’s autobiography, said that her death was the only thing that could “shut her up.”

He added, “And the silence is terrible.” 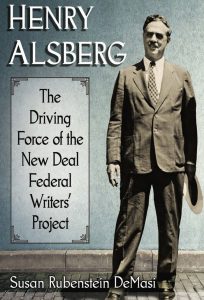 “The 1930s was the most creative period in American cultural life” claimed actress Toby Cole when I interviewed her shortly before her death at 92. I thought she was exaggerating because she had worked for the Federal Theatre Project (FTP) during the New Deal.  But after reading Susan Rubenstein DeMasi’s absorbing biography of Henry Alsberg, who headed the Federal Writers Project (FWP), I’m inclined to agree. It is virtually impossible to imagine such inventive individuals as Alsberg and Hallie Flanagan, who headed the Federal Theater Project during the New Deal, being hired by government today—even in a Democratic administration.

A rumpled bear of a man from a secular New York Jewish family, Alsberg was born in 1881 in New York and died in Palo Alto 89 years later after spending a lifetime necessarily hiding his homosexuality from all but radical friends like Emma Goldman.

DeMasi calls the 1920s “arguably his most active period, [when] he energetically segued from journalism to refugee relief work to theatrical pursuits to political endeavor,” but it is the work he did as head the Federal Writers Project for which, thanks to DeMasi’s book, as well as David A. Taylor’s 2009 Soul of People: The WPA Writers’ Project Uncovers Depression America, Alsberg will be gratefully remembered for the FWP’s volcanic output under his inspired leadership.

In 1934 Alsberg edited the large format book America Fights the Depression whose more than 200 photos showed the myriad of ways in which the new Civil Works Administration hired more than four million people to wage constructive war against the economic calamity during the winter of 1933-34.

It was probably on the strength of that book that WPA chief Harry Hopkins entrusted Alsberg to muster his own army of thousands of unemployed writers. Alsberg wanted to use that talent to reflect Americans back to themselves just as photographers of the Farm Security Administration, notably Dorothea Lange, Walker Evans, Gordon Parks, and Arthur Rothstein, were doing at the same time—even when that meant lancing popular mythology and telling the stories of those left in the dust.

The most famous outcome of the FWP was the now classic WPA guidebooks to all 48 states and many American cities. It also spawned hundreds of other books as well as transcripts of thousands of interviews including those with ex-slaves at the end of their lives and countless pages of research never published but now an invaluable resource to historians, ethnographers, folklorists and others.

Often difficult, utopian, and self-described as a “philosophical anarchist,” Alsberg was himself surprised to find himself working as an administrator within the government. A lifelong progressive in his politics, Alsberg had much to hide from the New Deal’s enemies, and DeMasi does a splendid job not only of resurrecting a secretive man’s life but delineating the reactionary forces in Congress that ultimately brought him and Hallie Flanagan down in a Communist witch hunt that foreshadowed the McCarthy era.

In her introduction, DeMasi admits that in writing her book, she fell in love with Alsberg. You will, too, in reading it.