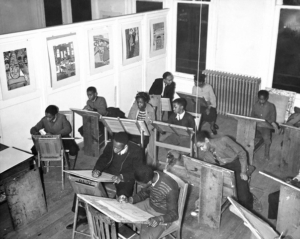 The Harlem Renaissance stands as one of the most important art movements in American history. The years 1918-1937 saw an outpouring of music, theatre, literature and visual art from this historical Black neighborhood in Upper Manhattan.

Federal “relief” dollars employed hundreds of Black visual artists, both on public art projects and as instructors at the WPA-funded community arts centers that nourished the Harlem arts movement.

The Federal Arts Project of the WPA commissioned more than five hundred murals for New York City’s public hospitals. The murals at the Harlem Hospital Center were the first major federal government commissions awarded to African-Americans. 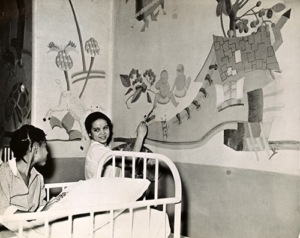 These murals by Charles Alston, Vertis Hayes, Elba Lightfoot, Georgette Seabrook, Morgan Smith, Louis Vaughn and Hale Woodruff, commissioned in 1936, depict the evolution from traditional to modern medicine and scenes of Harlem life. After decades of renovations and building changes, some of the murals had all but disappeared. They were rediscovered during a campus modernization project in 2004. Controversial at the time they were painted for their focus on Black life and culture, the murals are now regarded as national treasures. Five of the murals were restored and reinstalled at the hospital in 2005. 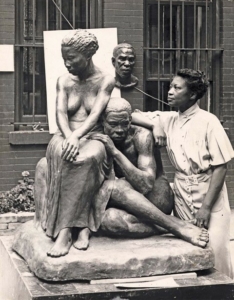 Other works by Black artists of the WPA include the Harlem River Houses auditorium friezes, Green Pastures and Walls of Jericho, painted by Richmond Barthé in 1937; and the Queens Hospital mural by Georgette Seabrook, completed in 1935. Aspects of Negro Life, a 1934 mural by Aaron Douglas, is still on display at the Schomburg Center for Research in Black Culture, a focal point of Harlem’s cultural life.

Harlem’s community art centers served as incubators for many Black artists. Best known is the Harlem Community Art Center (1937-1942). Co-directed by sculptor August Savage and painter Gwendolyn Bennett, both of whom worked for the WPA, the Center opened on December 27,1937, with First Lady Eleanor Roosevelt attending. 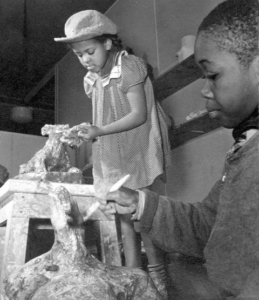 In summarizing the accomplishments of the Harlem Community Art Center, Bennett reported that 70,592 children and adults had participated in classes, lectures and demonstrations during the Center’s first sixteen months. 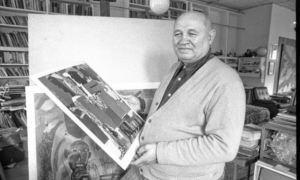 Artist Romare Bearden was active in many arts organizations, including the Harlem Artists Guild. Courtesy, Beardenfoundation.org.

The New Deal years also spawned advocacy groups for Black artists. The Vanguard and the Harlem Artist Guild, for example, successfully campaigned for more Black supervisors to be hired on WPA art projects and for equitable pay with whites. 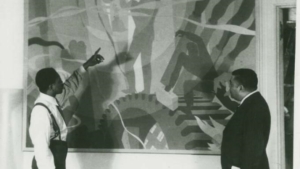 The New Deal is a model for how both artists and communities can thrive and prosper. It benefitted not only those hired to produce public art but also neighborhood art centers, which contributed to the community cohesion, literacy and vitality that would empower generations to come.