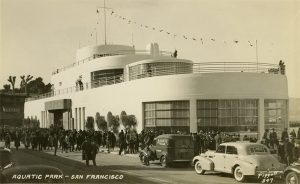 Denied admission to art colleges, Hilaire Hiler left Rhode Island for Paris in 1919 where he opened a legendary nightclub. At the Jockey Club, the first after-hours club in the Montparnasse District, Hiler painted the walls with colorful murals, and famously sang and played jazz piano with a monkey perched on his shoulder. The club proved wildly successful. Ernest Hemingway, F. Scott Fitzgerald, James Joyce, Anais Nin, Henry Miller, Marcel Duchamp, and Man Ray were among the artists and writers on the Paris scene in the 1920s who frequented Hiler’s club and became his friends. 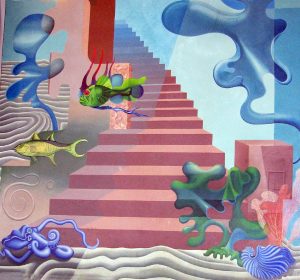 A joint project of the City and the WPA, the Streamline Moderne building designed by city architect William Mooser, Jr. broke ground in 1936. Working for the WPA, Hiler was assigned to decorate the interior and exterior of the building and supervised a team of artists, artisans, and crafts workers hired by the Federal Art Project. Hiler’s motifs of fantastical underwater scenes used in his murals are also found in mosaics, terrazzo floors, and friezes throughout the 4-story building. 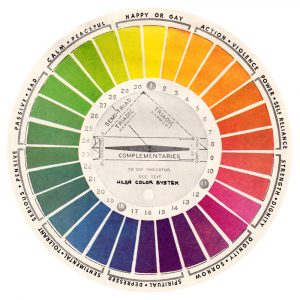 Hiler brought everything he’d learned about color and psychology to his murals in the main lobby. But first he painted on the ceiling of the nearby lounge a 47-foot-color wheel divided into 30 colors and hues. Hiler renamed the room the “Prismatarium,” writing that it functions in relation to the world of color much as a planetarium does for the heavens.

Novelist Henry Miller, a contemporary of Hiler, wrote, “Hilaire lives and breathes color. He is color itself. Sometimes he’s a veritable aurora borealis.”

Just before the art was completed, the City leased the building to a pair of restauranteurs who renamed it “The Aquatic Park Casino” and installed garish-colored furniture among many other violations of Hiler’s design aesthetic. Hiler and all the artists walked off the job. Beniamino Bufano refused to allow his sculptures to be installed. Sargent Johnson, one of only two African-American artists working for the WPA in California, abandoned the 140-foot mosaic he was installing on the veranda. It remains unfinished to this day. 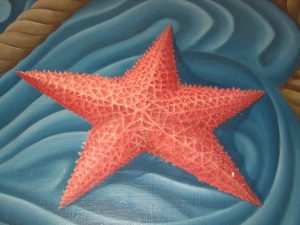 In a scathing letter to his supervisor, Hiler resigned just days before the park opened on January 22, 1939. He was not seen at the opening ceremonies.

Many of the artists found work at Treasure Island, site of the 1939 Golden Gate Exposition, where Hiler produced two decorative maps of Pacific nations in the Pacific House. He then worked  for the Army in the Presidio as a color consultant on camouflage, taught briefly at Mills College, founded a school in Los Angeles, relocated it to Santa Fe, and eventually moved to New York City. Toward the end of his life he returned to Paris where he died in 1966. 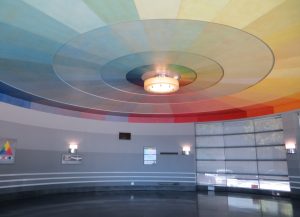 The Aquatic Park building underwent extensive restoration between 2006 and 2009. Restorations of Hiler’s murals and Prismatarium ceiling were completed in 2010.  The building today serves as a maritime museum, the centerpiece of the San Francisco Maritime National Historical Park.

Painting Aquatic Park Mural
To save time, Hiler began the work on canvas and carried it as far as possible before installing the murals on the lobby walls.
Photo Credit: Courtesy San Francisco Maritime NHP

New Deal art is endangered as post offices are sold off, public buildings shuttered, and artworks are relegated to museum vaults and private collections. The New York Times reports that the University of California misplaced, then sold a 22-foot-wide carving by renowned African-American artist Sargent Johnson. The work, created under the Federal Arts Project, was valued at more $1 million. UC mistakenly sold it for $150. The Living New Deal and the National New Deal Preservation Association are working together to defend the New Deal’s legacy. We’re calling on UC to inventory its New Deal artwork, ensure its safekeeping, and publicly display another Johnson work that is currently in a locked conference room on the Berkeley campus. We’re also investigating the legal ruling the General Services Administration cited when it gave UC permission for the sale, and exploring how the Johnson carving can be returned to the public trust.