Victor Arnautoff was one of the most prolific artists of the New Deal. Born in Russia in 1896, he served as a Calvary officer in WWI, and later in one of the White armies during the Russian Civil War. He arrived in San Francisco in 1925 to study art. When his student visa expired, he spent two years in Mexico as an assistant to the muralist Diego Rivera. In 1931, Arnautoff and his family returned to San Francisco, where he began to produce buon fresco murals, a technique in which the artist paints on wet plaster. The paint penetrates and becomes part of the wall, making frescoes very difficult to move.

Working for the WPA in 1936, Arnautoff created thirteen fresco murals at George Washington High School. Entitled the “Life of Washington,” the murals cover 1,600 square feet of the walls and ceilings of the school’s entry and main hallway. Arnautoff did extensive research for the murals. He wrote in his memoirs that he wanted to show two things: the life of George Washington and what he called the “spirit of his times.”  He also said, “The artist must be a critic of his society.” Arnautoff, who would soon join the Communist Party, called himself a social realist. He thought his paintings should show realistic people rather than abstract imagery, and felt an obligation to be a social critic.

The first mural chronologically in Washington’s life is divided by an image of a tree.

On one side of this mural Arnautoff portrays Washington’s early life, including as a surveyor. On the other side he shows the French and Indian War, Washington’s first military experience.

Instead of placing Washington in the middle of this scene, Arnautoff put American Indians in the center, surrounded on all sides by the British, the French, and the American colonials.

Here Arnautoff depicted the origins of the American Revolution—the Boston Tea Party, the Boston Massacre, the burning of the tax stamps. Again, Arnautoff did not put Washington in the center. Washington is in the upper right, arriving to take command of the army. In the middle, Arnautoff painted several working-class men raising the new flag.

This mural depicts the first winter at Valley Forge. The usual depiction of this event is a portrait of Washington praying in the snow. Arnautoff did something quite different. He shows Washington and three members of the Continental Congress warmly dressed in winter clothing and the enlisted men dressed in rags, their feet wrapped in bandages. Washington is pointing out the poor condition of his troops as a way of persuading Congress to give him more financial support. To me, this is Arnautoff’s social commentary on class privilege at the time of the American Revolution.

Arnautoff’s sketches for the mural suggest that this is a Hessian mercenary surrendering at Yorktown. Washington is absent from this mural. It is enlisted troops doing their duty.

This mural shows Washington at the end of the Revolutionary War bidding farewell to his officers, including Lafayette and Von Steuben, perhaps Arnautoff’s way of emphasizing that the American revolutionaries needed assistance from abroad to win their war of independence.

Opposite that mural, Arnautoff depicted Washington as president, mediating between Alexander Hamilton and Thomas Jefferson over the new Constitution.

At the entrance to that alcove, Arnautoff put this banner with a quotation from Washington about the importance of educational institutions.

In the final alcove, Arnautoff presented two more scenes related to Washington’s presidency. This one shows him bidding farewell to his dying mother. By some accounts, Washington was reluctant to leave her, but she encouraged him to go because of the importance of the work facing him as the first president.

Arnautoff learned through his research that Washington had tried to create a national university.

Now controversial, this mural shows Washington at his Mount Vernon plantation. Once again, Washington is on the margins. Arnautoff put enslaved African Americans at in the center of this mural. This was his comment on the fact— all too often ignored in the 1930s—that the same men who signed the Declaration of Independence, declaring “all men are created equal,” owned other people as property. For Arnautoff this was one of the great contradictions of Washington’s time, and he makes clear in this mural that Washington was dependent on enslaved labor for his wealth. Arnautoff was clearly using his art to provide social criticism.

Arnautoff said that, in his research for the mural, he looked for ways to connect Washington to the West. This would have been difficult because at the time the nation ended at the Mississippi River. But he found a reference to Washington making a statement about the significance of the West.

Arnautoff divided this now-controversial mural into three separate stories.   Washington is on the left side, pointing west. In the center, Arnautoff’s social criticism is seen in what the artist called “the march of the white race from the Atlantic to the Pacific.” Arnautoff’s murals are all painted in color, but these westward marching pioneers are shown in a ghastly grey scale—a technique he learned from Diego Rivera. Arnautoff’s pioneers are marching past a dead Indian warrior, his commentary on the settlement of the West.

The third story in this mural is on the right, where a white man and an American Indian chief are sitting down together with a peace pipe. Over their heads, however, is a broken branch, apparently Arnautoff’s way of depicting broken promises and treaties.

For Arnautoff, the “spirit of the times” of early American history involved its greatest injustices: slavery and the killing and dispossession of America’s First People.

Robert W. Cherny is professor emeritus of history at San Francisco State University. He is the author of Victor Arnautoff and the Politics of Art (University of Illinois Press, 2017), and numerous books and essays on U.S. history and politics.
Email | View all posts by Robert Cherny → 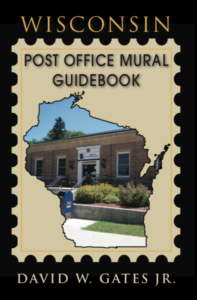