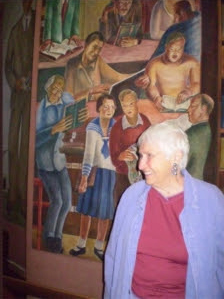 Ruth Gottstein, 1922-2022
A lifelong activist and champion of New Deal art, Ruth Gottstein, daughter of New Deal artist Bernard Zakheim, died on August 30 at age 100. Ruth vividly recalled accompanying her father, a founder of the San Francisco Artists and Writers Union, which lobbied for a federally funded arts program during the Great Depression, to the San Francisco General Strike of 1934. Among Zakheim’s controversial murals, “The Library,” a fresco at San Francisco’s Coit Tower, portrays Ruth as a young girl wearing a sailor suit.
Ruth and her late sister, Masha, advocated for the restoration of the long-neglected Coit Tower murals, produced under the Public Works Administration in 1934. Ruth and her son, Adam, recently saved Zakheim frescoes at the UCSF medical school from demolition. Ruth established Volcano Press, publishing 57 books between 1962 and 2017, many on women’s health and feminism. 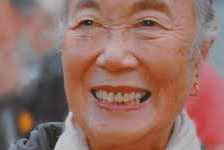 Activist Ying Lee, an early member of the Living New Deal, died on September 10 at age 90. In her autobiography, “Ying Lee: From Shanghai to Berkeley,” Ying recounted her upbringing as a first-generation Chinese immigrant. Ying taught at Berkeley High for more than two decades and became Berkeley’s first Asian American city council member (1973-78), fighting for rent control and greater diversity on the Council. She worked for Representative Ron Dellums, opposed the Vietnam War and later became active in Grandmothers Against War, in protest of the Iraq War. Ying remained a voice for social and racial justice through her final years.

“She was indomitable presence around Berkeley for decades, active in every good cause,” said Richard Walker, director of the Living New Deal.  “She will be missed.”