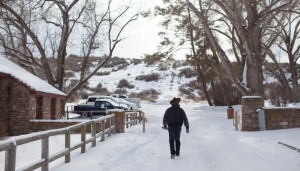 The Stewart Lee Udall Department of the Interior building contains one of the largest collections of New Deal art in Washington DC by some of the finest American artists of the time.

In 1938, Ernest Fiene painted a set of four oil-on-canvas murals depicting the land management functions of the Department of Interior, with funding from the Treasury Section of Fine Arts.  They are: “Winter Roundup,” “Placer Mining,” “Replanting Wasteland” and “Fighting Forest Fire.”

They are installed on the Second Floor main corridor, north of the Grand Staircase.

The Department of Interior Museum offers regular mural tours; check their website for information and registration.

For more information on the Interior building, its art and the artists, see Look and Perrault 1986 (below – available online). Artworks begin on p. 110.

The oil-on-canvas mural “Cattle Days” was painted in 1942 by Lew E. Davis for the Treasury Section of Fine Arts. The mural hangs in the lobby of the historic post office in Marlow, Oklahoma. It shows four cowboys in a corral branding cattle. One is standing with a lasso and several cows. The other three are squatting down, holding a cow which is about to be branded.

The historic post office in Beaver, Utah houses a fine example of New Deal artwork: “Life on the Plains,” an oil-on-canvas mural by John W. Beauchamp. The work was commissioned by the Treasury Section of Fine Arts.

The mural “Ranchers of the Panhandle Fighting Prairie Fire with Skinned Steer,” painted by Frank Mechau in 1940, was created for what was then the post office in Brownfield, Texas. The building now (2014) serves as the Brownfield Police Station.

Mechau described his mural as follows: “The prairie fire was a demon of the Panhandle. Sixty square miles of range could be destroyed in a day’s time. Once the flame began to spread there were few efficient ways to combat it.  Plowing a line was too slow. Backfiring too dangerous. Cowboys would fight the fire with wet sacks or kill a steer and partly skin it leaving the wet skin to drag behind them in an effort to rub out the edge of the fire” (Texasescapes).

This courthouse contains a series of oil murals depicting the region in the 19th century. The murals were painted by Ruth Monro Augur under the auspices of the WPAs Federal Art Program:

“Ruth Munro[sic] Augur, nationally known muralist, was forced on WPA rolls during the Depression because her commissions fell off so badly. She worked for $57.50 a month while painting the murals.

She officially began on Dec. 1, 1935, but a great deal of tedious research was necessary before the artist could begin to apply paint to the canvas. Every detail had to be correct and the artist was handicapped by having to reproduce a land and a people that no longer existed except in history books and the minds of a few old settlers.

She estimated that she spent the equivalent of 15 to 16 months in research before she started painting and total time spent in research and painting was three years.

The murals cover 1,136 square feet. To get some idea of the tremendous amount of labor and materials that were used in painting the murals, Miss Augur used 36 pounds of white paint on the murals and 20 pounds of combined colors.

Another unique and remarkable feature is the oil paints that were used were manufactured from a single chemical base, regardless of color. This was done in order to avoid fading and discoloration of the murals in years to come, and according to Miss Augur, the colors will be as bright 200 years from now as they are today.”   (http://www.visitenid.org)

This Treasury Section of Fine Arts mural, entitled “The Wealth of the West,” was painted for the Gunnison post office by Ila Turner McAfee in 1940.

The historic Cooper, Texas post office contains a Treasury Section of Fine Arts-commissioned mural entitled “Before the Fencing of Delta County.” The oil-on-canvas work was completed by Lloyd Goff in 1939.

The oil-on-canvas mural “Loading Cattle” by James Turnbull was painted in 1940 for what was then the Jackson post office. That building is now the Chamber of Commerce, and the mural now hangs in the new post office. The mural was funded by the Treasury Section of Fine Arts.

It is an excellent work of art with his use of cattle being loaded onto a cattle car, men on horses, and the train.  The intersecting and contrasting lines of the cattle car and the loading is particularly effective.

This has an additional interesting story in that it was initially selected to be placed in the Purcell, OK post office, but the 2 cities exchanged murals after the townspeople of Jackson objected to the Purcell mural since it portrayed just cattle being rounded up.  They wished their town to be portrayed as more modern and vibrant with the use of the train and loaded cattle.  To their credit, trains were a large part of the town and commerce of Jackson at the time.

James Turnbull was born in St. Louis in 1909, studied journalism at the Univ. of Missouri, then the School of Fine Arts in St. Louis and the Pennsylvania Academy of Fine Arts.  He lobbied for and was then named the director of the Missouri WPA project, resigning in 4 months to pursue art.  He painted 2 murals in Missouri.  During WWII, he was a war correspondent for Life magazine and after the war settled in Woodstock, NY. 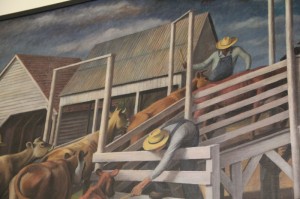 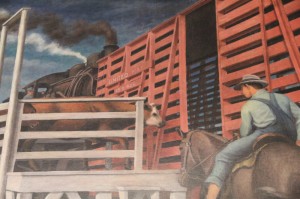