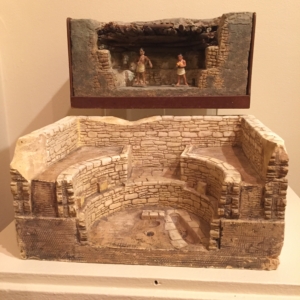 Attics sometimes become unintended archives. At the Museum of the American Indian in Novato, California, director Colleen Hicks and archeologist Teresa Saltzman made a serendipitous discovery early this year. In January 2016, they found nine models of ancient Southwestern Puebloan structures in the museum’s attic—dusty and forgotten for more than 35 years.

Inscriptions on the back of the handmade models revealed that they were created in 1934 by seven different artists working for the Civil Works Administration— one of many New Deal programs to put unemployed people to work during the Great Depression. In this case, the artists were commissioned for educational and documentary purposes as part of a reconstruction project at Aztec Ruins National Monument in New Mexico, an important preserve of Ancestral Puebloan structures. 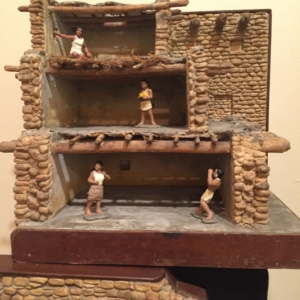 The models, constructed of plaster of Paris, wood, and stone, weigh about five pounds are about 9-inches high and 8-inches deep. Intricately detailed, the models represent archeological sites in national parks, including Mesa Verde, Chaco Canyon, and Aztec Ruins.

Some of the models, like that of the Pueblo Bonito, perfectly mirror structures at Chaco Culture National Historical Park, a place many Puebloans today consider their ancestral roots. Beginning around 850 AD, native people built a highly developed society at Chaco Canyon. Many Pueblo people today take annual pilgrimages to these sites to honor their ancestors. 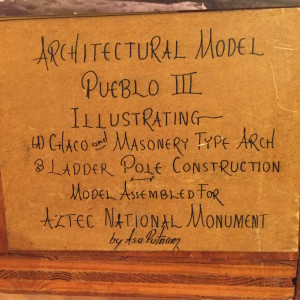 Inscription
Signature on the back of a CWA model.  Source
Photo Credit: Museum of the American Indian

Each model is dated and signed by the artist: Elizabeth Seabrook, Arthur Moore, Ruth Flores, Dick Dalryup, Bert Frost, Glen Berger, and Asa Putnam. But little is known about the models or the artists whose signatures they bear. The National Park Service has contacted museums around the country for any information about the CWA models, some of which are yet to be accounted for. They hope is to display them at the Aztec Ruins National Monument in honor of the National Park Service centenary this year.

Established 48 years ago as a repository for archeological artifacts from the indigenous Miwok people, the museum has evolved into an educational and cultural center for the Bay Area. The CWA models are part of the current exhibition of photographs of ancient Puebloan sites by California photographer Tom Benoit, on display through July 2016. www.marinindian.com

Colleen Hicks, MA, Executive Director, has been the Director of the Museum of the American Indian for 10 years. Teresa Saltzman, MA, is an archeologist and rock art specialist at the museum. Joshua Horowitz, Ph.D is on the museum’s Board of Advisors, and teaches history at Dominican University and San Francisco State University. Email