[UPDATE] The City Council of West Hollywood, on Dec. 2 voted 3-2 to immediately  demolish the Great Hall/Long Hall at Plummer Park. Community activists are scrambling to stop this, but fear that the minute the final vote is taken the wreaking ball will roll in on the morning of January 22, and demolish West Hollywood’s only WPA structure.

They are working to hire an attorney and must raise $15,000 by January 30. Contact [email protected] for more information. 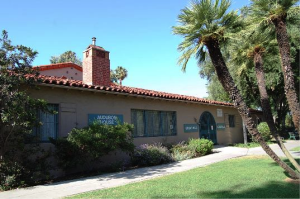 The City Council in West Hollywood, California is pushing an ill-conceived plan to demolish the Plummer Park Community Clubhouse, built by the WPA in 1938. It is the only WPA building remaining in West Hollywood.

Preservationists nominated the building for the National Register of Historic Places, but the Council opposed the nomination. One councilmember went so far as to say they should tear the building down right away.

Preservationists rushed to get the issue on the agenda of the California Historic Resources Commission. On May 1, the commission voted unanimously to approve the 75-year-old structure to the National Register of Historic Places.  However, the City Council can take a vote of “overriding consideration” and move forward with demolition.

It’s highly unusual for a city to oppose a National Register nomination, but the Council is pushing a controversial plan to overhaul Plummer Park that calls for an underground parking garage where the historic clubhouse stands. The Living New Deal and National New Deal Preservation Association sent letters protesting the plan.

The Plummer Park Community Clubhouse, originally called the Great Hall-Long Hall buildings, was intended to be the centerpiece of the park. Edward C.M. Brett, who was chief architect of Los Angeles County for three decades, designed the Spanish Colonial Revival structure. It has a long, north-facing courtyard and three distinct parts: a Great Hall, a Long Hall, and a small east wing that houses the building’s utilities and restrooms.

Meetings to incorporate the city were held here in 1984. The building also is considered historic as the meeting place for ACT UP, which pushed for government action on AIDS.

The City’s plans to raze the clubhouse have been stalled by cuts to redevelopment funds and community opposition. Though the building is now vacant and unused, it stands as a reminder of a time when the federal government supported infrastructure and employment projects, and reflects the concern government once had for the cultural and recreational needs of local communities.

To object to the plan to demolish the Plummer Park Community Clubhouse, contact Mayor Abbe Land and the City Council.