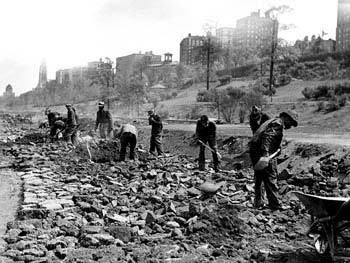 Born in 1944 at the height of World War II, I missed the WPA by just one year. Growing up in rural Virginia I never heard of it; nor in the years I lived Germany—first as an Army brat, and then in the Army itself. Then, in 1966, I arrived in New York City, where I lived alongside Riverside Park.

The 6.7-mile-long park along the Hudson River was my backyard for 46 years. I played there. My kids played there. As a runner, I covered every inch of it, from 72nd Street to the very top of Manhattan. I would run all the way uptown before there was even a running path, when the high grass was littered with broken glass and the hulks of abandoned cars.

All that time I had no idea that the park had been created in the 1930s by the New Deal. How would I know? There were no signs, no cornerstones, no plaques. Nobody knew. It wasn’t until I moved to the Bronx at the edge of a magical neighborhood park where people of all ages play, exercise, relax, and socialize, that I became curious. Where did this park come from? 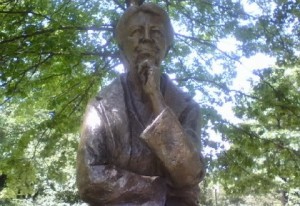 It took some digging, but I found out it had been constructed by the WPA, completed in 1937. I soon discovered that I was surrounded by New Deal creations: parks, playgrounds, schools, college campuses, beaches, highways, bridges, post offices, swimming pools, stadiums, athletic fields, court houses, bicycle paths, and subways. And that’s just in the Bronx! And here, too, nobody knows.

Given the current economy and the upcoming 2016 elections, more people need to know about what was created during the Great Depression—and can be again. So I go around photographing New Deal sites, unearthing their stories, and sending them on to the Living New Deal.

When I went back to Manhattan recently to photograph Riverside Park, I saw it in a whole new way: This great green space, access to the river, boat basin, ball fields, playgrounds, running paths, benches, fountains, lights, bathrooms— all created by thousands of unemployed laborers, designers, architects, and engineers hired by the federal government to convert what had been a muddy, smelly, railroad bed into all of this splendor for generations to come.