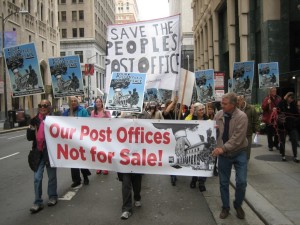 When the USPS announced plans to sell the building, the Living New Deal organized meetings that led to the formation of Citizens to Save the Berkeley Post Office. Teach-ins and demonstrations on the steps of the downtown post office encouraged the mayor and City Council to join the fight.

After months of public protest and meetings with Postal Service officials proved fruitless, the City and the National Trust for Historic Preservation filed a federal lawsuit seeking to require the USPS to conduct public hearings under environmental and historic-preservation laws before trying to sell the building. When confronted in court with multiple violations of the National Environmental Policy Act and the National Historic Preservation Act, the Postal Service told federal court Judge William Alsup that the post office was no longer for sale. The judge ordered a 42-day public notice of any pending sale or relocation of postal services, and will continue to monitor the USPS for five years. Therefore, future legal action challenging the USPS remains an option.

Berkeley’s successful showdown offers hope to other communities struggling to preserve their post offices and living wage jobs. But the losses continue to mount. 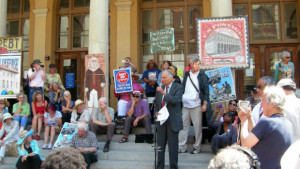 Public protest failed to save Venice Beach, California’s post office, built by the WPA in 1939. A treasured local landmark, the 24,000-square-foot, Art Deco building houses a mural, “Story of Venice,” by artist Edward Biberman. To great fanfare, in 2012 the USPS sold the building to a film producer for $7.5 million. At the press conference the buyer assured the mayor and others assembled that the building would be preserved and its mural restored. The building now stands empty, covered with graffiti.

Conservatives in Congress have long pushed to privatize the post office. During the Nixon Administration, Congress abolished the U.S. Post Office Department and replaced it with the United States Postal Service, a corporate-like entity with an official monopoly on delivering mail in the United States. In 2007, Congress required that the Postal Service pre-fund 75 years of employee benefits. To avoid forced bankruptcy, the USPS began liquidating properties, often over the objections of local communities. The USPS identified some 600 properties, valued at hundreds of millions of dollars, for possible sale. Many are on the National Register of Historic Places, and many were built by the Roosevelt Administration and contain New Deal artworks.

The Advisory Council on Historic Preservation investigated the USPS sell off. Its report to Congress was highly critical of the USPS and its exclusive contract with the real estate giant, CBRE, in which Richard Blum, husband of California Senator Dianne Feinstein, has a large interest.

Berkeley’s Congresswoman Barbara Lee has introduced The Moratorium on U.S. Historic Postal Buildings Act, but Congress has yet to act.