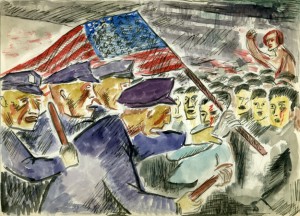 “Art, Activism, and the WPA,” on exhibit at the University of Richmond Museums in Virginia, focuses on the passionate social engagement of New Deal artist Leon Bibel (1913-1995), whose work depicts “the social ills of racism, poverty, unemployment, and war; the necessity of protest; and the shared humanity of the common worker.”

Art on display includes a painting called “The Lynching,” the lithograph “Unemployed Marchers,” and many scenes of the Spanish Civil War.

Curator Phyllis Wrynn of the Park Slope Gallery in Brooklyn, who knew the artist personally, says Bibel “saved everything.” The exhibition includes documents, photographs, and sketches from Bibel’s 9-year stint working for the Federal Art Project of the WPA. Bibel worked as an assistant to Bernard Zakheim in San Francisco and then moved to New York City and joined the FAP there. The financial security that came with this government job and the sense of being involved in a vital art movement made the WPA years the happiest of his life. According to Wrynn, Bibel told her “It was a miracle to be paid to do what he loved,” and spoke of “the camaraderie among the artists who supported each other’s efforts in many ways, eagerly sharing techniques, supplies, and information.”

Wrynn made a short film about Bibel’s life and work to accompany the exhibit. (See it on-line at https://parkslopegallery.com/html/leon-bibel-movie.html.) Documentary footage, photos, Bibel’s paintings and drawings, and his on-camera reminiscences give a vivid shapshot of the art world in the 1930s. The New Deal art projects and the Artist’s Union are prominently featured.

Like the Bernard Zakheim exhibition held in San Francisco two years ago, this show foregrounds the artist’s WPA connection. Although many artists of that generation spent some time working for the Federal Art Project, this has often been treated as a tangential or even embarrassing part of their careers. The Living New Deal is delighted to see the WPA finally getting credit for nurturing artists’ careers, sponsoring memorable works, and contributing significantly to the development of 20th century American art.

Information about the exhibition and related programs is at https://museums.richmond.edu/exhibitions/lora-robins-gallery/Leon-Bibel.html.