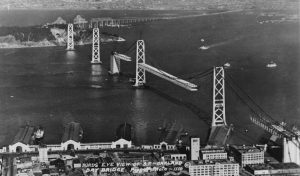 Last November, following the election of Donald Trump, the San Francisco Board of Supervisors adopted a resolution declaring the City’s commitment to values of multiculturalism and tolerance.

“RESOLVED, That no matter the threats…,San Francisco will remain a Sanctuary City; we will not turn our back on the men and women from other countries who help make this city great, and who represent over one third of our population. This is the Golden Gate—we build bridges, not walls.

In that spirit, the Living New Deal will host “Building Bridges, Not Walls” two concurrent exhibitions featuring art and performance celebrating the role of immigrants in building the Bay Area’s bridges, and the unity these iconic structures represent. 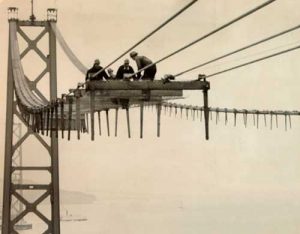 The San Francisco-Oakland Bay Bridge and the Golden Gate Bridge, both completed during the Great Depression, were designed by immigrants: Ralph Modjeski, a Polish immigrant, was chief engineer on the Bay Bridge. Leon Moisseiff, a Latvian immigrant, was the lead designer of the Golden Gate Bridge. Both bridges had been largely constructed by the children of immigrants, including legendary ironworker Al Zampa, whose parents came from Italy. Zampa was one of the first workers to survive a fall from the Golden Gate Bridge, making him a charter member of the Half Way to Hell Club, a fraternity of men who had fallen and landed in the bridge’s safety nets. Thirty-five men died working on the Bay and Golden Gate bridges.

A starting point for the exhibit is the twenty steel rivets that the Living New Deal obtained when the original Bay Bridge, which opened in 1936, was dismantled, having been replaced by a new eastern span. 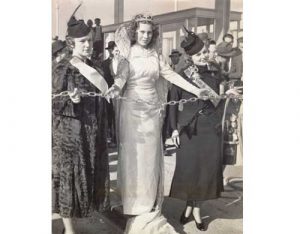 The themes of immigrants, diversity, and internationalism are symbolized by the bridges, that connect the Bay Area’s diverse communities and give the region its common identity.

In July, “Building Bridges, Not Walls,” a celebration of these bridges and the people who built them, will open at the History Center at San Francisco Main Library. A companion exhibit featuring Bay Area artists, photographers, and poets will be held at the historic Canessa Gallery in San Francisco’s North Beach. 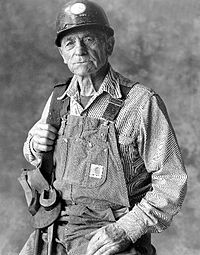