The Civilian Conservation Corps  (1933–42), is one of the earliest of the New Deal’s relief programs and arguably its best known. Lesser known is the CCC’s female counterpart—dubbed the She-She-She, (1933-1937), a program for women at a time when New Deal jobs programs were largely for men. 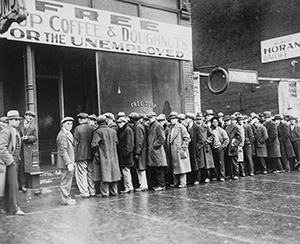 Though rarely seen in Depression-era photographs of soup kitchens and unemployment lines, an estimated 200,000 women were living on the streets, sleeping on subways and “tramping” the countryside. Little was done about it until First Lady Eleanor Roosevelt used her contacts and influence to advocate for them. “As a group, women have been neglected in comparison with others, and throughout this depression have had the hardest time of all,” she said. 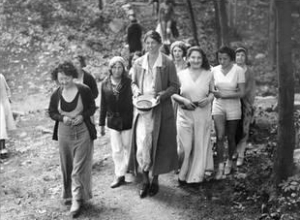 The first of what would become a network of 90 residential schools and camps for women, Camp TERA, (Temporary Emergency Relief Administration) opened in June, 1933 at Bear Mountain State Park, about an hour’s drive north of New York City. Mrs. Roosevelt and Secretary of Labor Frances Perkins presided at the camp’s opening.

The program was slow getting off the ground. Applications for admission to the camps poured in from women nationwide, but eligibility was unduly strict.  Various states and organizations offered the use of their camp facilities but ran in to red tape.

The CCC, run by the U.S. Army, enlisted 300,000 men within its first three months. They were quickly deployed to camps and put to work on highly visible public service projects where they developed practical skills. They were paid $30 a month, of which $25 was sent home to their families, adding to the CCC’s general popularity. Some 2.5 million men went to work for the CCC during its nine-year run.

Such work, training and earning opportunities for the unemployed women were curtailed from the start. Joyce L. Kornbluth explains In her book, Sisterhood and Solidarity: Workers’ Education for Women, 1914–1984, “CCC administrators vetoed the national advisory committee’s recommendation that young women in the resident programs be used, as men were, in reforestation and community service projects since, they claimed, ‘work outside the camps [for women] was not practicable and the supervision and transportation costs would be greatly increased.’”

Without a work component, the women’s program appeared to be little more than a government-sponsored vacation. The program was presumed a boondoggle. Skeptics derided it as the “She-She-She.”

Once accepted to the program, women were bused to camps to live for two to three to months. They received five dollars a month for personal expenses and worked up to 70 hours a month to cover the cost of their food and lodging. No monies were sent home. 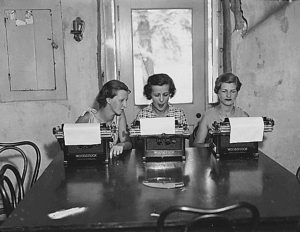 Sewing, cooking, music, drama and handicrafts were staples of camp life. Some camps offered secretarial classes but the focus was on homemaking skills. One participant recalled, “Most of us got the impression that they wanted to teach us something useful if we got married immediately and that that was the only proper thing to do.”

“Workers’ education,” a curriculum developed by Hilda Smith that included English, domestic science, hygiene, public health and economics, was renamed “social civics” when the American Legion and some nearby communities complained that leftist discussions and programs were taking place at the women’s camps.

Only about half of She-She-She participants managed to find jobs when they returned home. Most employers resisted hiring women while there were men unemployed. Yet, many women who joined the She-She-She reported that the experience had improved their health and given them a new outlook on life. 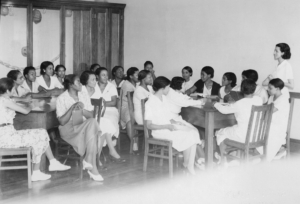 “The camp was ideal for building up run-down bodies and renewing jaded spirits,” wrote civil rights activist, Pauli Murray, of Camp TERA. Another woman recalled, “It seemed like someone did have an interest in whether we lived or starved. And was trying to help.”

For more on the She-She-She, read Joyce L. Kornbluth’s essay, The She-She-She Camps: An Experiment in Living and Learning, from her book, “Sisterhood and Solidarity: Workers’ Education for Women, 1914-1984.”